Saakashvili breaks through Ukraine border assisted by crowd of supporters

Saakashvili breaks through Ukraine border assisted by crowd of supporters 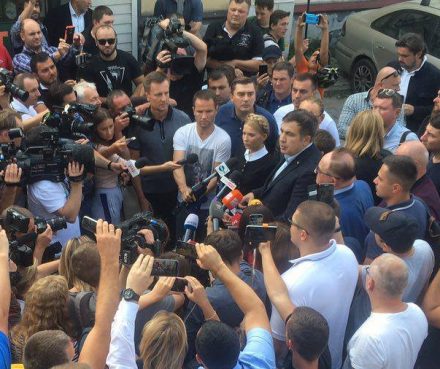 Mikheil Saakashvili addressing the media before boarding the train. (Facebook.)

TBILISI, DFWatch–Former president of Georgia Mikheil Saakashvili broke through the border to Ukraine on Sunday, aided by a crowd of supporters.

At first, the train he was riding from Poland, bound for the Ukrainian city of Lviv, was held at the border in Przemysl, but the Georgian-born politician Mikheil Saakashvili, who vowed a few weeks ago to return to Ukraine, instead took a bus to another border crossing at Shehyni, where he succeeded in breaking through a cordon of police.

In front of numerous TV crews, he has crossed the Polish border and while in the neutral strip  a crowd of his supporters ran toward the police cordon, took hold of him and forced their way back to Ukrainian side of the border.

Saakashvili is now on his way to Lviv, a city in western Ukraine, and he is expected to go later to the capital Kyiv.

Saakashvili was this year stripped of his Ukrainian citizenship and a few years ago of his Georgian citizenship. His entry to Ukraine today took place despite the threat of detention and possible extradition to his native Georgia, where he is wanted on several charges and may face imprisonment.

“Shevardnadze didn’t fear me as much as Poroshenko does,” Saakashvili said in remarks to the media in Rzeszow, Poland en route to Ukraine on Sunday.

He has changed his previously announced plan to enter Ukraine at the Korczowa-Krakovets border crossing and instead chose to head for Ukraine by train.

Earlier, Ukrainian authorities stated that they wouldn’t allow him in.

Saakashvili, who served 18 months as governor of Ukraine’s Odessa region, was accompanied by his wife, Sandra Roelofs and his younger son, Nikoloz, as well as Ukraine’s former PM Yulia Timoshenko and Polish MEP Jacek Saryusz-Wolski and several Ukrainian opposition MPs.

The former governor claimed he had to change his route because Ukrainian authorities had sent so-called ‘titushki’ to thwart his entry to the country. ‘Titushki’ refers to groups of thugs utilized by Ukrainian authorities to break the EuroMaidan protests in 2013 and 2014. The Ukrainian opposition today argues that the current authorities are using the same style of tactics. Some of the ‘titushki’ have been rounded up or detained by police.

A large crowd of Saakashvili supporters left a makeshift camp at Krakovets and moved to Lviv train station. Police units also have been amassed in Lviv.

Tens of Ukrainian opposition MPs also came to the border to meet Saakashvili and facilitate his crossing, the former Odessa governor said. Some of them entered Poland and joined Saakashvili.