Former president of Georgia stripped of his Ukrainian citizenship

Former president of Georgia stripped of his Ukrainian citizenship 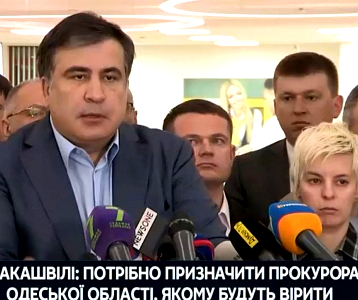 TBILISI, DFWatch–Ukraine has stripped former Georgian President Mikheil Saakashvili of his citizenship, shortly after a visit to Georgia by Ukraine’s President Petro Poroshenko.

A Ukrainian member of parliament first reported it on Facebook, and the information was later confirmed Wednesday evening by the State Migration Service.

According to the report, Saakashvili’s citizenship was revoked because he provided false information when he obtained a passport, on the question of whether he had been legally prosecuted in Ukraine or any other country.

Mikheil Saakashvili was president of Georgia from 2004 to 2013. After his party, United National Movement, lost the parliamentary elections in 2012, authorities in Georgia launched several probes of ex-officials. The ex-president himself was initially not charged, but asked to provide testimony, which he refused.

Eventually, he was charged on July 28, 2014, and the court ordered his pre-trial detention in cases involving exceeding official powers, seizure of an opposition TV station in 2007, diverting public funds and other offenses.

Saakashvili’s stint in Ukrainian politics began during the “EuroMaidan” protests in Kiev in against the regime of Yanukovich. Following the change of power, he was appointed governor of Odessa, in May, 2015.

As Odessa governor, the leader of the 2003 Rose Revolution spoke in interviews to international media about his ideas about bringing western style reforms to Ukraine and combating the entrenched corruption there, although after serving for 18 months, he resigned in November 2016 after a bitter confrontation with his one time friend and ally, President Poroshenko.

The latter visited Georgia a week ago and was met with excessive hospitality by Georgian authorities. During the visit, Saakashvili wrote on Facebook that Poroshenko informally met with former PM Bidzina Ivanishvili, whom the opposition accuse of controlling the GD government through informal contacts.

“Their secret meeting lasted more than two hours and was almost entirely devoted to me,” Saakashvili claimed.

“Unfortunately, we have to state the fact that in this situation Poroshenko behaves not as the president and guarantor of the constitution, but simply as a soul trader.”

A close ally of Saakashvili’s, former deputy chief prosecutor David Sakvarelidze, confirmed Wednesday that the erstwhile strongman has been stripped of his Ukrainian citizenship and that he has been barred from re-entry to Ukraine.

Saakashvili is currently in the United States. It’s unclear whether losing his Ukrainian citizenship may pave the way for him being handed over to Georgia to face imprisonment. Georgia has been asking Kiev to extradite him.