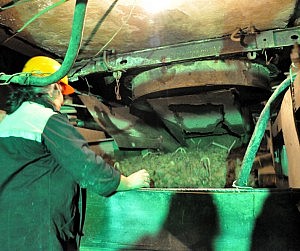 This woman’s job is to remove pieces of wood and other impurities from the manganese ore, using her bare hands. Chiatura. (DF Watch.)

TBILISI, DFWatch–Georgia’s Trade Union blames a weak labor code for what it says is a rise in the number of deaths in the workplace since the Saakashvili regime took away almost all worker protection in 2006.

During Saakashvili, the labor code was changed so there was almost no protection for workers. This was part of a neoliberal policy intended to draw international corporations into investing in Georgia.

According to the trade union, many Georgian workers have had to pay for this policy with their lives. The union claims the number of deaths in the workplace has increased after the labor code was amended in 2006. The number of such deaths peaked in 2010 with 81, while the lowest number occurred in 2011, 21, according to a new report published by the union.

Things have not been much improved after Georgian Dream took over, judging by the report. Before the election in 2012, the coalition now running the country promised to improve worker protection, but according to the trade union there are many important problems that still need to be addressed.

The report further shows that over the last three years, 135 people died on the job, while 587 were injured. Last year alone, 41 workers died in the workplace, while 61 were injured.

When the labor code was stripped of worker protection in 2006, there also existed a labor inspection service which went around monitoring safety measures in the workplace, but the body was abolished by the Saakashvili government in order to fight against corruption.

The new government amended the labor code, and the new code came into force on July 4, 2013, but no changes concerned workers safety. The Labor Code requires employer to provide a safe environment for life and health, but doesn’t indicate punishment in case an employer violates this rule.

The only body which now controls conditions in the workplace is the technical and construction supervisory agency, which is subordinate to the Ministry of Economy, but the functions of this body is limited and it monitors only the most dangerous workplaces, such as the manganese mines in Chiatura in western Georgia. Many other facilities are not monitored.

The Ministry of Health recently said work is underway to make Georgian legislation more in line with EU legislation, but provided no details about this process.

Last week, the the ministry informed that from 2015 there will begin a monitoring effort of labor security. This will be optional, however; if private companies want to participate, they can ask the ministry to carry out monitoring. The government has promised to reestablish a labor inspection, but nothing is known about how or when this might happen.

Last year, DF Watch reported several cases of workers who died at work. Most of the cases were in mines in western Georgia. In August, a 52 year old engineer died of electric shock when he was trying to carry out repairs on a locomotive in a mine in Chiatura.

Another worker died when he was caught by falling debris from a wall that fell down in a plant in Chiatura.