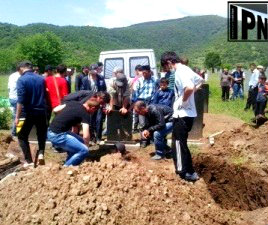 TBILISI, DFWatch–The bodies of three militants who died in a border shooting in August 2012 were Thursday reburied in Duisi, in the Pankisi Gorge in Georgia.

An autopsy has been carried out on the bodies of Salam Zaurbekov, Aslan Margoshvili and Bajaudi Baghakashvili, following a decision by the Ivanishvili government to reopen the investigation into what happened in Lapankuri on August 29, 2012, and the following days.

The drawn-out battle claimed the lives of fourteen people; eleven militants and three Georgian servicemen. Lapankuri is a village which lies in the Lopota Gorge near Pankisi.

There were indications that the fighters had not come across from Russian Dagestan and entered Georgia, but the other way around; that they came from the Georgian side and were about to enter Russia.

The newly appointed ombudsman, Ucha Nanuashvili, in March wrote in his annual report that there is evidence that the militants who died in Lapankuri were participants in a training program for Chechen fighters run by the Georgian government at the time; a program whereby up to 120 fighters had been brought in from European countries, set up with apartments in Tbilisi, and given guns and training at two military bases outside the capital.

According to his findings, the Lapankuri shooting began as the militants wanted to end their training and leave for Russia, but their Georgian handlers refused to let them leave.

The investigation now continues as four more bodies will be dug up in the next few days and examined next week.

The results of all these autopsies will become known in about a month and a half.

Also relatives of the dead, including some Chechen victims, have called for a new investigation. Family members today told journalists that despite the fact that their religion prohibits removing the dead from their graves, they still agreed to it, in order to find the truth.