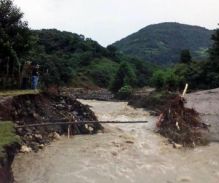 TBILISI, DFWatch–Three people died when the town Vani in western Georgia was flooded on Sunday.

Heavy rain made the river swell and swoop up several cars and carry them away. A total of five people were in the cars. Three were found Sunday night, one of whom later died.

To others were found dead Monday morning.

Finance Minister Nodar Khaduri said as he visited Vani that the government will cover the funeral costs of the victims.

The government has set up a commission to calculate the damage done by the flood to nearby villages.

The flood killed livestock, flooded the first floors of houses and caused a bridge connecting two villages to collapse.