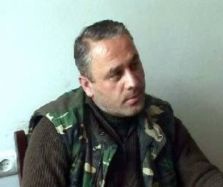 Roman Dumbadze sided with the rebels during a stand-off between Adjara and Tbilisi in 2004, a decision he was sentenced to 17 years in prison for. May 21, 2012, he was assassinated in Moscow. (IPN.)

TBILISI, DFWatch – A court in Moscow has placed three persons into pre-trial detention until August 21, accused of killing a former Georgian general.

Roman Dumbadze sided with the rebels during a stand-off between the region Adjara and Tbilisi authorities, a decision he was later convicted of treason for. The former general was killed in Moscow on May 21.

Dumbadze was killed in a drive-by shooting by two men on a motorcycle. A witness said he had been followed for some time before it happened.

Russian media reports that Belkania was the one following after the general, while Berishvili drove the motorcycle. He denies the charges. Tarughashvili was riding the bike and the one who did the shooting.

Berishvili blames the other two of what happened, and claims that when he drove Tarughashvili to the place, he didn’t know the purpose. But the investigation revealed that he accepted payment after the attack and was also linked by evidence found at the crime scene.

Dumbadze died at the place of the shooting, investigators established.

He was senteved to seventeen years in jail in 2004 for disobeying President Saakashvili’s orders, but in 2008 during the Russo-Georgian war, Georgia exchanged him for 12 Georgian prisoners. Later, Dumbadze was granted Russian citizenship by then president Dimitry Medvedev.