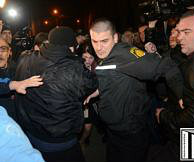 From the July 7 scuffle outside Dinamo stadium in Tbilisi. (Interpressnews.)

TBILISI, DFWatch–Tbilisi City Court has fined three participants at a rally outside Dinamo stadium on July 7.

Groups of mostly young people rallied against Russian Duma members who were watching a match between the football teams Dinamo Tbilisi and Dinamo Moscow. It was the first time in 24 years that the two teams met.

When the rally developed into a scuffle between police and protesters, the three were detained, and will now have to pay USD 240 each for resisting police, the court ruled.

Detailing the violations, the judge explained that Davit Gogokhia had attacked police cars, while Lasha Rukhaia provocatively lied on the ground despite being ordered by police several times to stand up.

None of the three admit guilt, and they all plan to appeal the court’s decision to the Appeal’s Court.

The court ruling was criticized by parliamentarians for the National Movement party. Its MP Akaki Minashvili earlier claimed that Duma members had not visited Georgia after the 2008 war while Saakashvili’s party was in power, but the claim was later rebutted by the current government, which presented a list of Duma members who had in fact visited between August 2008 and October 2012.

The Prosecutor’s Office wanted to place the three in administrative detention for 15 to 20 days and while arguing its case showed video footage filmed by Rustavi 2.