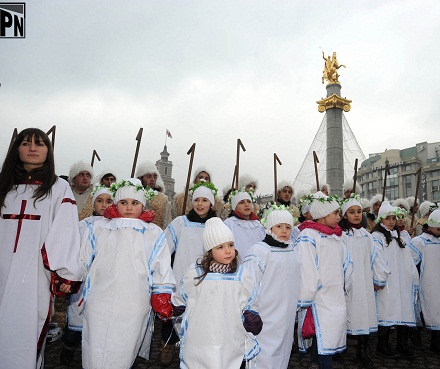 Thousands celebrated Christmas in the streets of Tbilisi. (Interpressnews.)

TBILISI, DFWatch — A traditional Alilo procession was held in Tbilisi on Monday to celebrate Christmas according to the Julian Calendar.

Alilo, which is also a Christmas chant, was organized in each region and city of Georgia, as well as different districts of the capital. The parish gathers in order to collect sweats, clothes and toys for orphans and homeless people, walking from house to house and singing a Christmas chant. 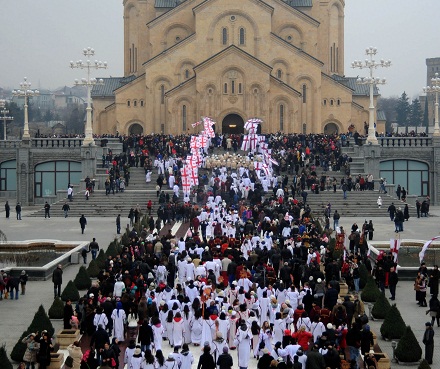 A large procession started midday at Roses Square in the center of Tbilisi. The crowd following after counted several thousands who finally met up at Trinity Church, which is the largest church in Georgia.

First stop on the walk was the old parliament building on Rustaveli Avenue. In the lead was clerics with icons and crosses as well as actors performing and people in national dress stopped to greet members of parliament from the majority, who gave them sweets and wished them a happy Christmas.

Citizens of Tbilisi greeted the crowd in the streets and gave them presents, fruits, traditional Georgian sweets and chocolate.

A parallel procession went from the Isani district of Tbilisi. 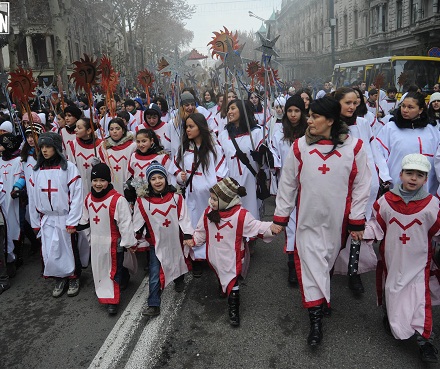 Members of Tbilisi City Council also wished Alilo participants merry Christmas. They greeted the procession on Freedom Square, where the office of the local government is located. Chair of the Council gave presents together with other members.

“I congratulate you and to the whole Georgia. I especially want to congratulate Abkhazia and Tskhinvali [Georgia’s breakaway regions]. Let God wish unity and happiness for Georgia,” he said, inviting participants to the at church.

Alilo also walked past the presidential palace, where the president personally gave Christmas gifts. He congratulated all of Georgia and wished people a successful and happy year.

He also invited guests inside the palace and into his cabinet. The procession finished at Trinity Cathedral.

Large processions were also held in Batumi, a city on the Black Sea coast, in Kutaisi, the second largest city, and in other regions of Georgia.