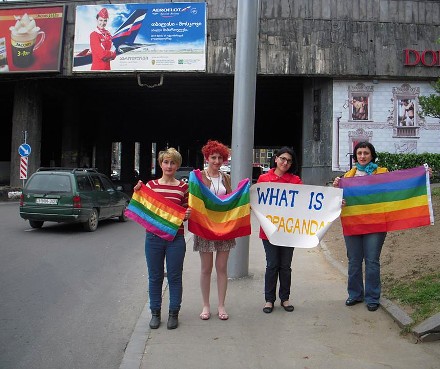 TBILISI, DFWatch–“This street is taken – there’s no place for homophobia and transphobia here!” This is the slogan of another online campaign to prepare for the International Day against Homophobia and Transphobia (IDAHOT), May 17.

Behind the campaign stands called Women’s Initiatives Supporting Group (WISG), which brought supporters out in the streets of Tbilisi on Tuesday, carrying rainbow flags and posters, with notes like ‘stop homophobia’, ‘no hate’, ‘this street is taken.’

A few days earlier, the organization LGBT Georgia also launched an online campaign which called on people to post photos of themselves holding notes that said May 17 is the IDAHOT day.

After two years of violence in a row on May 17 last year human rights organizations decided not to hold any gathering outside in the streets for IDAHOT, while Patriarchate of Georgia proposed to mark a day of ‘purity of family’ instead of anti-homophobia day.

This year’s online campaigns are directed at protesting against a decision by the Georgian Orthodox Church to make May 17 into a day-long celebration of family values, including morning prayer, culture and entertainment events during the day and an outdoors Gala concert at Freedom Square in the evening.

“The main reasons driving counter-demonstrators to attack the abovementioned peaceful demonstrations are directly connected to the struggle for appearance in public space, the human rights of LGBT persons, highlighting the problem of homophobia and transphobia in our country, as well as increasing visibility of the LGBT community,” a statement reads that was put out by WISG.

The online campaigns condemns the violence on May 17 two years ago, when a large crowd of several thousand people violently attacked a gathering of less than 30 people who wanted to observe the day against homophobia.

“If you don’t want to support statements motivated by hatred, with your inaction, if you believe that all groups should be able to enjoy their constitutional rights; if you want public space to belong to you as well as others – look around you! Public space is not limited to the central street of the city,” campaigners write, and call on people to participate.

“Do you see that one street is occupied? Occupy another one. Know that wherever you are, there is no place for hatred, xenophobia, homophobia and transphobia.”