Stalin monument goes up and is taken down in Georgia

Stalin monument goes up and is taken down in Georgia 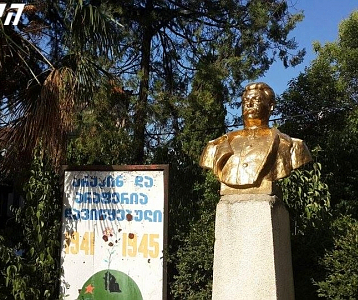 TBILISI, DFWatch–Locals in a village in Georgia’s eastern Kakheti region installed a bust of Joseph Stalin on Victory Day, May 9.

This was the third time someone put up a bust of the dictator in Akura since Victory Day, May 9, 2012.

On the previous two occasions, the local government dismantled the bust or someone paint bombed it.

This time the bust disappeared before the local government had a chance to dismantle it.

The village leader was planning to dismantle the bust and fine those who put it there, since Georgian legislation now prohibits the promotion of communist symbols.

The previous time the bust was installed  was in August, 2014, in the same village.

Information Center of Kakheti (ick.ge) quotes a trustee of the village saying that locals removed the bust as soon as they found out that the local government wanted to dismantle it.

The bust was visible in Akura for many years, but it was dismantled in 2010 by decision of the local government. in December, 2012, a month after the change of government, locals brought the bust back.

Later it turned out that the people who put up the monument, were those who took it away.

“Why it is a crime? Was it bad what he did? I was little, but I remember what people were saying?” Naira Datunashvili from Akura told Rustavi 2.

Gamgebeli Alexandre Shatirishvili said in the evening that these were only few tens of people, who erected the monument. They were explained that it was violation of law and it would be dismantled, that’s why they dismantled the monument before the local government did.