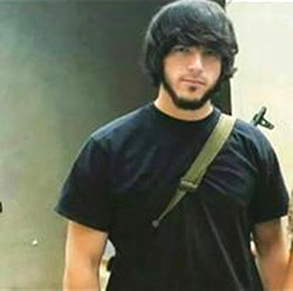 Information Center of Kakheti published this photo of Turpal Borchashvili.

TBILISI, DFWatch–A 23 year old was reported by locals in his hometown in Pankisi Gorge Sunday to have died in the Syria war.

Turpal Borchashvili is at least the thirteenth Georgian citizen who has died in Syria fighting for Islamists.

Borchashvili was from the village Dzibakhevi. Information Center of Kakheti quotes family members who said he left for Turkey six months ago to look for work. He died during fighting in Kobani.

Ibrahim Tsatirashvili, 33, was reported dead in May, 2015. Earlier in February, Davit Sviakauri, 24, died.

Locals think a group of recruiters are persuading mostly young people to leave Georgia through Turkey and go to Syria to join ISIS. Most of them fight under the command of Omar al-Shishani, real name Tarkhan Batirashvili, who is also from Pankisi and is designated a terrorist by the United States.

Among those who left, there are also minors. The young who go to fight usually say they are going to look for work in Turkey but later turn up in Syria.

A few weeks ago, four people were detained for having links to ISIS.