Third Georgian fighter dies in the war in Ukraine

Third Georgian fighter dies in the war in Ukraine 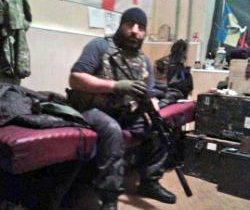 Tamaz Sukhiashvili would have become 37 years old on Sunday. (Interpressnews.)

TBILISI, DFWatch–A third Georgian has died in the war in Ukraine. Tamaz Sukhiashvili, 36, was killed in the battle for Donetsk Airport near the village of Pisky on January 17, fighting alongside Kiev’s forces.

Three more Georgians were slightly wounded in the same battle.

Sukhiashvili was from the village Tskramukha, near Khashuri in eastern Georgia. He left behind two children.

The family of the deceased say he was serving in Georgia’s armed forces until 2012 and participated in missions in both Iraq and Afghanistan.

Sukhiashvili’s body was brought to a military base, according to his uncle Bondo Tabatadze, who informed that the body might be flown to Georgia in four days.

Mother of the deceased said he resigned from the Interior Ministry’s special unit in order to go to Ukraine against his family’s wishes.

“His friends were in Ukraine and he thought it was necessary to go there,” Lali Sukhiashvili said.

In January another Georgian, Shalva Bukhaidze, died in the war in eastern Ukraine, fighting on side of the separatists.

Before that, in December 2014, Alexandre Grigolashvili was killed in fighting in Shchastya, in the Luhansk region. He was part of the ‘Georgian legion’, a military unit fighting on Kiev’s side in the war.

A few days before Grigolashvili died, former Minister for Euro-Integration Giorgi Baramidze from the National Movement visited the Georgian volunteers in the field. After news of Grigolashvili’s death, the Defense Ministry sent out a press release which criticized the Georgian fighters in Ukraine but quickly withdrew it.