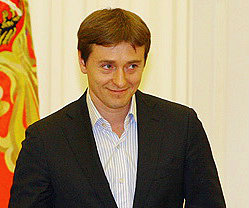 TBILISI, DFWatch–A theater play featuring Russian actor Sergei Bezrukov has been canceled in Tbilisi, because of his support for Russia’s policy toward Crimea.

The background is a petition signed by artists living and working in Russia who support President Putin’s handling of the Crimea situation, published on the website of Russia’s Culture Ministry.

At this moment, the statement is signed by 86 artists and includes ethnic Georgians such as Zurab Tsereteli, the president of the Russian Art Academy, dancer Nika Tsiskaridze, and Sergey Bezrukov, a Russian actor.

“Zurab does not interfere in politics; he never signs any political document. He didn’t sign this one either,” said Shagulashvili, and explained that the Russian Ministry of Culture mentioned Tsereteli in the list even though the artist has not signed.

On Wednesday, Georgian Chamber of Culture announced the cancellation of a theater play featuring Sergey Bezrukov that was planned for May in Tbilisi.

“Because of the public letter of artists who support Putin’s decision about occupation of a neighboring country, Ukraine’s territory, the Georgian Chamber of Culture made a decision to cancel Sergey Bezrukov’s theater play in Tbilisi. Once more, we want to express our support for Ukraine, its sovereignty and territorial integrity and our friend and hero, the Ukrainian nation,” the Chamber of Culture’s statement says.

David Okitashvili, head of the chamber, said: “The worst thing is when artists are involved in political adventurism.”

He continued saying that they have already informed Bezrukov’s theater about the cancellation, but received no answer yet. He said the Russian actor has expressed interest in visiting Georgia and that the play was not an initiative from the Georgian chamber.