The story of Azerbaijani journalist fleeing her country

The story of Azerbaijani journalist fleeing her country 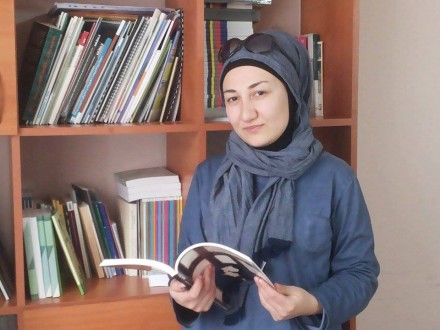 TBILISI, DFWatch–Last week European House hosted another meeting of the Thinking Citizen Center, an alternative education initiative for Georgia’s ethnic Azerbaijanis. The Center’s vision is the intellectual and cultural transformation of ethnic Azerbaijani citizens of Georgia and broader awareness of the universal values of human rights, peace and civic responsibility.

On March 29 the guest speaker of meeting was investigative journalist Gulnur Kazimova. Her presentation was based on her articles about Azerbaijani minority in Georgia and their problems – early marriage, discrimination, sports, education and language problems. The issues she raised stirred energetic discussion.

The 28-year-old mother of two kids moved with her husband to Tbilisi more than a year ago. The reason was her journalism activity.

“I consider myself as a war journalist, because I periodically made many reports in the Azerbaijan’s western regions, in the border village in Tartar, Gazakh and Goranboy. The reason we moved here is that my family and I were under government pressure,” Kazimova said to DFWatch.

In Azerbaijan she worked for different local TV channels and newspapers, and then spent 7 years at Radio Liberty’s Azerbaijani bureau.

”At the same time I also worked for IWPR and the local newspaper “Zerkalo”. Mostly I was writing short investigative-type articles on social issues,” she says.

IWPR, Institute of War and Peace Reporting is a London-based NGO focused on the peaceful transformation of conflicts worldwide. Caucasus branch of it has been actively involved in peace building activities across South Caucasus.

“For example, one of the articles which I liked most is about the orphanage in Ganja, western Azerbaijan,” Kazimova keeps on telling her story.

She found out that at this house girls were beaten and sold for sex slavery, she says. After her story was published, the Ministry of Internal Affairs launched an investigation into the issue, and as a result the director and his assistant resigned.

”As far as I know, this orphan’s house now functions normally,” Kazimova said.

”To be an independent journalist in the [Azerbaijan’s] west regions is a big problem. I always was undergoing persecution, and it became more dangerous when Hasan Huseyinli [the chief of Intelligent Citizen, the educational center] was arrested. I was told by Ganja Mayor that I should not publish reports about this case. He threatened me with arrest. They took my husband and me to the police station several times. Then my husband was kicked out from his job. I was followed periodically by police and had to change the kindergarten for my children several times because I was worried about them,” Gulnur recalls.

“After all their warnings, the last article I wrote was about a protest by villagers who blocked the road leading to Ganja. I found out the Ministry of Internal Affairs initiated a criminal case against me on the grounds as if my article was based on a lie. After warnings from my closest friends, that night we left Azerbaijan.”

Kazimova says that even after they moved to Georgia, pressure continued. Despite being gone over a year, she says her family is still under government pressure and that her brother recently lost his job.

“He worked in a completely different sphere, at one of the wedding restaurants. He was told it was because I was still working with international organizations, writing for those organizations under different names. In other words, they still follow my activity,” Kazimova says, adding that police officers often visit her family in Azerbaijan.

”Police said to my family that if they don’t tell them where I am, they will find me somehow by themselves, or, they say they know I’m in Georgia. I think that if they really want to find me they can do it. For now, they just want us to be scared. They know that I continue working with international media which are not on the favored list of the Azerbaijani government. That’s why they somehow want to make me stop writing.”

She does not know what will happen in the future. Will they stay here for more several years or will they move to Europe?

“Of course, I really want to go back to Azerbaijan, and continue to live and work there,” she said. “But now, unfortunately, it is impossible. How long we will live here we don’t know. We are living here temporarily. I don’t know what will happen tomorrow.”