The grave of painter Pirosmani allegedly found in Tbilisi

The grave of painter Pirosmani allegedly found in Tbilisi 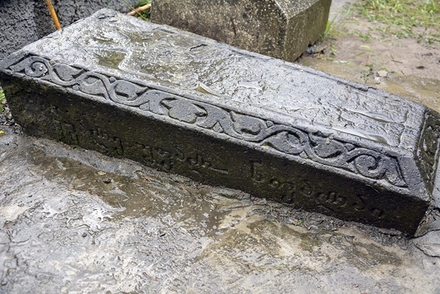 The grave bears the inscription ‘Forgive, God, Nikala’ and is located at Kukia cemetery in Tbilisi. (Photo published by the Culture Ministry.)

TBILISI, DFWatch–The tomb of the Georgian painter Niko Pirosmani has allegedly been discovered in Tbilisi.

Pirosmani was self-taught and his paintings are easily recognized for their simple style and depictions of country life, often of merchants, shopkeepers, workmen and nobles. 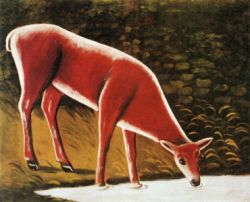 A legend surrounds the most famous painting, ‘Aktrisa Margarita’, which portrays French actress Margot de Sèvres, whom he heard singing, fell in love with, and then sold everything he owned in order to buy numerous red roses which he spread out on the street in front of the actress’ hotel room.

When Pirosmani died of liver failure in 1918, at the age of 55, he was still relatively unknown, and his exact place of burial has been a topic of speculation.

But according to Georgia’s Ministry of Culture, the tomb may have finally been found at Kukia cemetery in Tbilisi.

It was journalist Maya Ramishvili who stumbled upon the grave, which has an engraving on it which says “Forgive, God, Nikala”. Nikala is another form of Pirosmani’s given name.

She discovered the tomb about a month ago near the place where her own parents are buried. Several things make her believe it is the grave of Pirosmani, the Culture Ministry writes.

But Ramishvili herself says she isn’t sure it is the tomb of Pirosmani, but she thinks scientists should study the site.

She is backed up in that view by historian Zaza Abashidze, and Eter Tataraidze and Amiran Arabuli, who are researchers of tombstones.

Tataraidze says an old woman in her childhood used to visit Kukia cemetery and tell her she went there to visit the grave of Pirosmani, which was next to the church.

Arabuli thinks that what we see now is not the full size of the tombstone and that the date of death should be engraved lower down but is covered by soil. He thinks it is quite possible that it is the tomb of the painter, who lived all his life in poverty.

Culture Minister Guram Odisharia said he thinks the grave needs to be examined and promised to support the researchers in the effort.