The broomstick revolution is coming

The broomstick revolution is coming 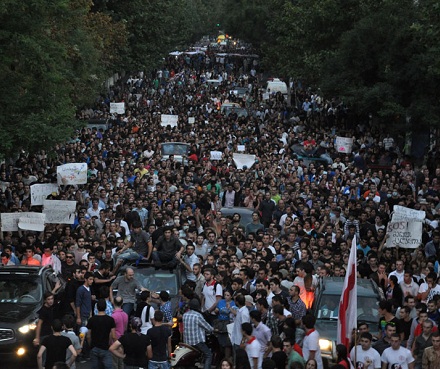 Protesting continues unabated as Georgians are talking about another revolution; "the broomstick revolution". (Photo: Mari Nikuradze.)

TBILISI, DFWatch – Anger is not abating in Georgia, after the second minister leaves because of revelations of prisoner abuse.

The largest crowd of demonstrators seen so far in this crisis swept through the central thoroughfare of Tbilisi Thursday evening, descending on the palace of President Mikheil Saakashvili.

They were upset after a handful of video recordings showing sadistic and humiliating abuse of prisoners finally proved what everyone has known or suspected for years: that prisoners have been beaten and raped, and the world has ignored it because it chose to believe in the rosy lies of Saakashvili’s government.

The demonstration started from the state university, moving through Rustaveli, the main street in downtown Tbilisi. They went past the Ministry of Justice, Chief Prosecutor’s Office, the prison in Ortachala and then to the residence of Georgian President yelling ‘Misha leave.’

A priest appealed to youngsters at the residence to keep calm and not to get angry.

Demonstration then moved back to Tbilisi Concert Hall. They blocked the entrance of the hall with broomsticks.

It was nearly midnight. Majority of participants had already left when suddenly bunch of people started yelling and whistling, when the others approached the news spread all over protesters that Interior Minsiter Bacho Akhalaia resigned.

People started clapping, throwing balloons, some even opened champagne in the cafe, but they immediately specified their demand that resignation of the minister is not enough, but he should punished as Bacho Akhalaia is a person considered to be behind all these tortures in prisons.

Rally protesters carried with them broomsticks and burned them. The reason brooms have become a symbol in the recent rallies, is that a broom was used to sexually humiliate a prisoner in one of the videos.

The crisis started three days ago, and protests have sprung out of a spontaneous milieu of students and youth, joined by others.

It was sparked when several Georgian TV stations aired several videso showing physical violence, and verbal and sexual humiliation of prisoners at Georgian jails. The imagery was reminiscent of what came out of Abu Ghraib prison in Iraq in 2004, but rawer and more brutal. The airing immediately set off a firestorm of emotions throughout the country.

People took to the streets, and gathered outside Gldani prison, officially known as Prison Number 8, the place at which the videos were shot in 2011. Parents and relatives of prisoners also gathered around Tbilisi Concert Hall, where President Saakashvili was inside attending a concert.

The emotions set loose have been building up for years, as democracy groups and people with loved ones in jail have tirelessly tried to raise international awareness of the rape, abuse and violence that goes behind prison walls and during police interrogation. They have felt let down and distrusted by the West, which has at times issued statements of “concern” but continued to pay for European and American reform advisers who have known about horrible abuse but deliberately kept silent, thereby helping the regime to create the semblance of a situation that is improving.

Finally, the world is listening — and believing.

Protesters stayed there the whole night. In the morning one of their demands was granted as the prison minister, Khatuna Kalmakhelidze, resigned.

This was not enough to temper the mood, though, as protesters also demanded for the interior minister and other officials involved in creating the conditions for prison abuse to resign and be punished.

The next days, rallies were organized in different places: at Tbilisi State University, where students and their friends, supporters gathered; other parts of people were still at the Concert Hall, while part moved to the government building.

The majority of Georgian towns were also full of people protesting against the prison system.

In the first half of Thursday, opposition also organized a demonstration in the capital. They were gathered in downtown Tbilisi, while youth were moving from TSU. At a point where they had to meet, students decided not to join rally organized by political party and they changed their direction in the other way. For the last three days students demand to separate politics and this protest from each other as they consider it is not right to have political points in a rally which is against torture, terrible situation at prisons.

At the end of day enormous colonel of people made sense that it was separated in two parts. Students leaded the colonel, then there was small space followed by another flow of people. In the end protesters merged and ended protesting at Tbilisi Concert Hall.

For the whole day protesters kept repeating the same phrase: that this is growing into the next revolution – the ‘broomstick revolution.’

Late night those who were still at Concert Hall planned another rally for Friday. Youngsters will join people gathered at prison 8.

Rally participants sent letter to Georgian president with a demand that until 12:00 at night on Friday Bacho Akhalaia should be arrested.