Terror suspect was beaten, according to lawyer

Terror suspect was beaten, according to lawyer 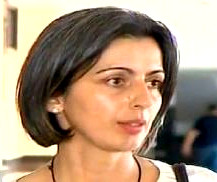 TBILISI, DFWatch–The lawyer of one of the men who is accused of planning a terrorist attack against a gas pipeline in Georgia claims her client has been severely beaten in detention.

Seven men were arrested on Monday, accused of planning to blow up a pipeline supplying Armenia with Russian natural gas.

The lawyer says her client won’t be able to attend the court hearing today at Tbilisi City Court. He says that confessed to investigators.

“I have been at the hospital. He is in a grave condition, his skull is cracked,” the lawyer says.

The aunt of the detainee also confirmed that he is in hospital. She says that he is a former soldier, and that she hasn’t had contact with him for over a year.

“I would never think that they would get him in such a condition during detention or while giving testimony. He admitted everything. If he is guilty he has to be punished, but can he survive until then?” she told journalists.