Tense ahead of gay rights rally in Tbilisi today

Tense ahead of gay rights rally in Tbilisi today 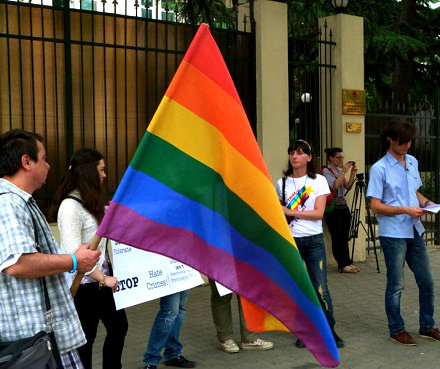 TBILISI, DFWatch–Rallies are planned in Tbilisi today to prevent a gathering of activists who want to mark the International Day Against Homophobia.

The two organizations Identoba and Women’s Initiative Support Group announced about a month ago that they were planning a 30-minute flash mob rally at 13:00 May 17 on Rustaveli Avenue to protest the violation of the rights of LGBT people. The announcement caused consternation especially among religious groups.

Up to ten organizations launched a movement which aims to prohibit ‘propaganda and advertising of perverted sexual relations’ in Georgia.

Today from 09:00 am people plan to gather in front of the old parliament building in Tbilisi to condemn what they call the ‘propaganda’ of LGBT people and to demand a prohibition. According to the plan, at 11:00 they will be joined by parish and clerics.

Catholicos Patriarch Ilia II, who has large influence in great part of Georgian population, on Thursday appealed to Tbilisi City Hall and government to withdraw the permission for the planned May 17 rally on Rustaveli.

“The Church considers people with such inclinations as persons of severe sin, who need support and help for improvement, not encouragement,” his statement reads.

Tbilisi City Hall responded that May 17 there are planned rallies in front of parliament regarding the International Day Against Homophobia, while clerics and parish plan an assembly on Rustaveli Avenue in front of a school there.

City Hall drew attention to the fact that the law on assembly and demonstrations only obliges citizens to notify the local government about rallies. There are not issued, nor required, permissions for rallies.

According to the City Hall statement, they have notified the patrol police department of the Interior Ministry about the May 17 events.

Speaker of Parliament Davit Usupashvili on Thursday said he is sure that the police will act adequately and the constitution will be defended.

“I am against any kind of violence and discrimination. It should become the rule of our lives. No-one’s rights should be violated in the country, but if anyone thinks their rights are violated or in danger, they must have the right to openly observe their opinion,” he said.

A few days ago, Prime Minister Bidzina Ivanishvili said during a press conference that the police will protect the rights of the participants at the anti-homophobia rally.

“I’ve repeatedly stated that sexual minorities are members of society just like any of us and their rights should be protected,” he said. “We’ll do everything to protect the rights of minorities.”

Organizers of the May 17 rally on Thursday held a conference to discuss the problems LGBT people are experiencing in Georgia together with non-governmental organizations and foreign diplomats, as well as a few representatives from the government.

During the conference, the French Ambassador to Georgia said he fears the May 17 rally might transform into ‘a celebration of homophobia’ as LGBT people might be way less than those organizing the protest against them.

Thomas Hammarberg, the EU’s Special Representative in Georgia, expressed hope that there won’t be any violence at today’s rally. He said it is important that everyone can express their own opinion without being threatened with violence.

During the conference, Hammarberg spoke about the problems of LGBT people worldwide, bringing good and bad examples from developed countries of Europe in this regard.

According to the government representatives present, the Justice Ministry has started work on a draft bill about discrimination, which will go through a process of discussions and consultations with international and local organizations.

Representative of Identoba explained that they do not plan to bring balloons or colored things, but will hold a silent protest with banners and messages. There will be a small flash mob, when participants will dress in colored t-shirts to form the rainbow flag.

She said blocking the road is not on the agenda.

Thursday night, clerics and ordinary citizens gathered at the old parliament building in Tbilisi, and clerics led people in prayer. More than a hundred people gathered. The police was mobilized in the street.

“Religion and morality will save Georgia”, “Stop Promoting Homosexual Propaganda in Georgia,” their large posters read.