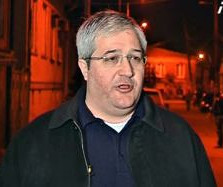 One of the policemen sent information to National Movement politician Givi Targamadze. (Interpressnews.)

TBILISI, DFWatch–An employee of the Georgian Interior Ministry was sacked Thursday because he allegedly had been handing over secret information to parliament member Givi Targamadze from the National Movement.

Nine other police employees were also fired for leaking information to lawyers and private individuals.

An investigation conducted by the General Inspection of the Interior Ministry claims that Ruslan Baziashvili in the patrol police broke into the ministry’s computer system and illegally obtained information about a particular person. He provided Targamadze with photos that showed this person crossing the border.

The information was later used by a TV company, according to investigators, who also write that Baziashvili used the database of the ministry several times to inform Targamadze.

The citizen is suspected of murdering a policeman and the opposition believes that officials in the Interior Ministry helped him cross the border to avoid punishment. But after the media released footage of the border crossing, the ministry informed the same day that the suspect was detained after he crossed the border and is now in detention.

“The Ministry of Internal Affairs calls on political parties to abstain from attempts to discredit the police by means of such methods,” the ministry’s statement reads. “We would also like to remind police officers regarding the law on police, according to which a police officer has no right to use their official power in favor of any political party interests.”

Targamadze responded on Thursday that this was not the only time that has happened, on the contrary, the employee used to inform him, as an MP and a member of a group of trustees of parliament.

“Considering that the group of trustees doesn’t properly functions in parliament, I decided to publish this information,” he said, and continued talking about the professionalism of Baziashvili, who is a person who preferred to be a policeman in the first place and has a decent past.

Deputy Interior Minister Archil Talakvadze said in interview with Imedi TV that a group of trustees is not entitled to obtain information this way. There are clear rules for how to get information, which is to ask the ministry in an official letter.

“In this case, the fired policeman didn’t cooperate with the group of trustees but directly with Givi Targamadze, who had personal interest in using information for party interests,” he said.

MP Irakli Sesiashvili from the Georgian Dream coalition, who chairs the group of trustees, told journalists that a member of the group doesn’t have a right to act independently.