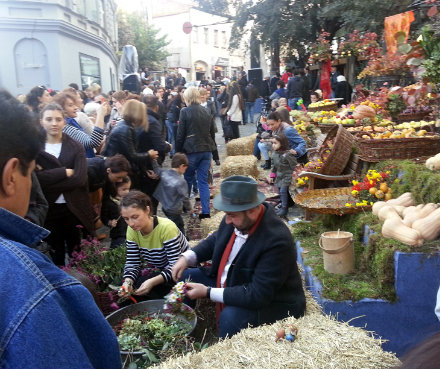 TBILISI, DFWatch–This weekend marks the first Tbilisoba – the annual celebration of Georgia’s capital – under the new local government. A new mayor and new members of the City Council were elected in June.

The list of events planned on Saturday and Sunday is quite lengthy and draws in every corner of Tbilisi, including its suburbs.

Tbilisoba has been marked every October since 1979. It’s a street fair where people bring traditional dishes, and display and sell fruits and sweets. There are national folk dances or other performances, while in the morning everyone who wants can participate in squeezing grapes for making wine.

This year, there are planned fruit and vegetable markets in many districts of Tbilisi, as well as exhibitions of photos and paintings.

In schools, there will be competitions and exhibitions of handicraft made by children, while there will be a festival of junior rugby at Locomotive Stadium.

Concerts and sports competitions are planned in almost every corner of the city, while on Pushkin Square there will be organized an open air cinema to show footage of the first Georgian movies.

On Sunday, there will be a competition for fishermen on the bank of the River Mtkvari in Isani district. Same district there is planned a competition in wrestling.