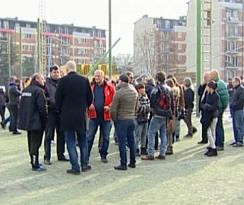 Employees showed up today at the office of Tbilservice, the company responsible for keep Tbilisi clean.

Workers also claim that they should have received a so-called thirteenth salary payment for New Year, but only part of that payment was transferred.

They also claim that the company pressured some of the workers to not take part in the strike.

“We want increased pay because everything has become expensive and we want the thirteenth salary, which belongs to us,” one of the workers told Interpressnews.

The strike gathered supporters in the early morning hours, but after Davit Burchuladze, a representative of Tbilservice, threatened them, the number of protesters was reduced.

Davit Charkseliani, head of the legal department of Tbilservice, said the same day that the thirteenth salary was reduced for some of the workers because of ‘disciplinary offenses’. He said the claim about pressure from the management is a lie.

“There are 4,000 people employed in Tbilservice. All of them were paid and they received a bonus, the so-called thirteenth salary. 3,700 received it,” he said, and explained that the reason some only part of the bonus was disciplinary offenses.

In case of offenses, the company has a right to not to pay the bonus at all, but the management decided to pay them a reduced bonus.

“There hasn’t been any pressure. Davit Burchuladze might have told employees to show up for work.”

Charkseliani saw the strike as ‘a provocation’, but said that the strike will not paralyze the work of the cleaning service.

Workers plan to continue their strike until their demands are met.

Mayor Davit Narmania said on Wednesday that if the strikers don’t get back to work, they will be replaced. He said that the service is working normally, as there are reserve employees who temporarily may replace those who are taking part in the protest.