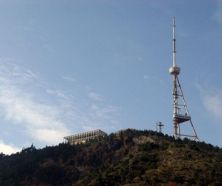 The Tbilisi TV tower has gone dark at night because of a budget gridlock in the city. (Interpressnews.)

TBILISI, DFWatch–Tbilisi’s most visible landmark, the Mtatsminda TV tower, has gone dark at night, because of the the city’s failure to pass a budget for this year.

City Hall decided to switch off the light show on the tower because of the City Council’s failure to pass a 2014 budget on December 29 last year.

The city is now getting near the limit of what it may spend without a budget, which is one twelfth of the size of last year’s budget.

Acting Mayor Sevdia Ugrekhelidze said the city administration decided to first make cuts in things which don’t directly affect the lives of Tbilisians, but only concern the appearance of the city.

“We decided to switch off the TV tower until the budget is confirmed and there won’t be any financing to pay for the light on the tower,” Ugrekhelidze said Monday.

The city’s executive government is staffed by people from the former ruling party, the National Movement, but the elected assembly has a majority from the Georgian Dream, who voted against the budget because they think it lacks transparency and is made so as to help the National Movement party ahead of this year’s local election.

Ugrekhelidze, who took over for Mayor Gigi Ugulava a month ago as the latter was suspended pending trial for corruption, claimed that the Georgian Dream representatives turned down the proposed budget in order to hurt the population.

She said without a budget, a number of the city’s projects, like social programs, vouchers, health care, kindergartens, cleaning services and repair work on bridges and tunnels, cannot be financed.

City Hall has now sent a new draft budget to the City Council, and appealed to council members to start consultations and solve the gridlock in the interest of Tbilisians.