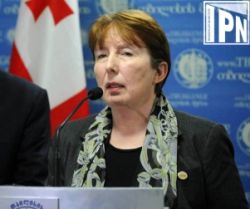 TBILISI, DFWatch–The city of Tbilisi’s elected representatives have again failed to approve a new budget for 2014. 17 assembly members supported the new draft prepared by City Hall, 22 voted against. 24 votes were required for the budget to pass.

December 29, the City Council failed to approve the first version of the budget. Georgian Dream, which has a majority in the assembly, was against the budget because they saw it as unduly promoting the interests of the National Movement party, instead of helping Tbilisians in general.

The executive and the elected body in Tbilisi are controlled by the two opposing blocs in Georgian politics. In recent years, the National Movement lost its majority in Tbilisi’s elected assembly as its support eroded around the country, but it still controls the capital’s executive government; Tbilisi City Hall.

On Wednesday, Irakli Shikhiashvili, head of the council, said the new draft is also absurd, and it is out of the question to approve it. He said the draft is a complete utopia and the new government will be forced to fulfill it after the election, which would be a burden and it would be impossible to fulfill all the goals and projects defined in the draft.

According to Papuna Petriashvili, Tbilisi’s deputy mayor, City Hall followed the recommendations from the City Council in 55 topics while working out a new draft.

Tbilisi City Hall earlier issued a statement saying that this time, the City Council doubts that the proposed budget can be fulfilled, so now they suggest reducing every section of the budget by ten percent. But Georgian Dream’s council members don’t recall making such a proposal.

Acting Mayor Sevdia Ugrekhelidze said on Wednesday that City Hall will prepare a new budget bill together with the population.

She said that the first time City Council rejected the budget they sent a letter with remarks about what they didn’t like. A few days ago, City Hall received ten different letters from different factions and commissions ‘not even bothering to sum up their remarks together.’

She said, now City Hall will begin working in another way, as there is no point in having consultations with the City Council.

“We decided to have discussions with people and prepare an even better budget than before,” she said. Ugrekhelidze said they will listen to people’s opinion in every district and collect much information.

“However, I’m not sure that the new budget will be approved, but we will show them how a budget prepared by agreeing with people looks like.”

She added that City Hall will start meetings with people from Thursday.

According to law, the City Council must review the new budget bill by March 11.