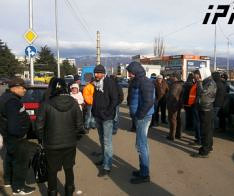 TBILISI, DFWatch–Part of the waste collectors in the capital resumed their strike on Monday, demanding a full payment of their holiday bonus.

The workers went on a strike last week, demanding increase of the pay and receiving the so-called 13th salary. Their demands remain the same.

Waste collectors claim that the administration put pressure on them and threatened to fire them if they don’t call off the strike.

The management of the company Tbilservice last week said that only small part of the employees received a reduced 13th salary due to disciplinary offenses. Mayor of Tbilisi Davit Narmania later said that if the employees didn’t go back to work, they would be replaced.

Tbilservice Group also said that they are using the services of reserve workers to temporarily replace the ones who are on strike and that their operations have not been affected by the conflict.

“As soon as we noticed that actions [taken] by particular workers have a negative influence on keeping the city clean, we will replace them with new staff according to law,” Narmania said on December 31.

“No-one should interfere [with] keeping the city clean.”

He added that the city is not planning to consider the demands of the workers who are on strike.