Tbilisi gearing up for UEFA Super Cup between Barcelona and Sevilla

Tbilisi gearing up for UEFA Super Cup between Barcelona and Sevilla 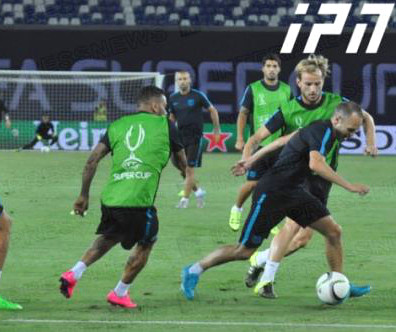 TBILISI, DFWatch–Everything is set for this year’s UEFA Super Cup final between Barcelona and Sevilla. It begins at 22:45pm at Dinamo Arena in Tbilisi.

Before the match there will be a display of Georgian folk dances and a rendition of the UEFA Super Cup anthem.

The message of today’s match is ‘Football United for Peace’. The two teams will appear on the field together with 1,000 children and grownups to form a human chain as a symbol of peace and unity.

All tickets are now sold. Ticket sales has been long and complicated process for both Georgian and foreign fans, since online ticket-selling failed and they were sold outside in Tbilisi.

Vendors keep selling tickets for between USD 150 and 300 in online forums.

The Tbilisi metro will run until 03:00am because of the match. Many roads in the capital will be closed to traffic after 18:00: Tsabadze Street, Tsereteli Avenue until Vakhushti Street, Agmashenebeli Street, Davit Kipiani and Metreveli Streets, Tamar Mepe Street from Tsinamdzgvrishvili and Tsereteli crosses, Abastumani Street.

Driving will be allowed on left bank of the river Mtkvari, as well as on the rest of Tamar Mepe Street and Tevdore Mgvdeli Street.

Those who are without tickets will be able to watch the match on a large screen to be installed in Vake Park, the same place where large crowds of fans spent a night waiting to buy the tickets earlier this summer.