Tbilisi Pride to go ahead, despite threats from radicals

Tbilisi Pride to go ahead, despite threats from radicals 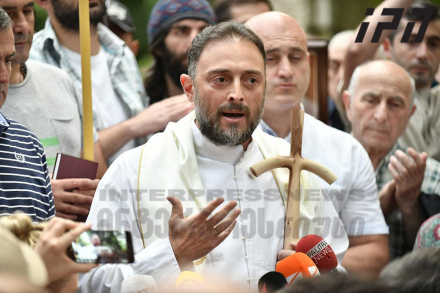 Levan Vasadze warned that vigilante patrols will assemble ‘if needed’ and prevent Georgia’s first Pride parade from going ahead. (Interpressnews.)

TBILISI, DFWatch–After much deliberation, the organizers of Tbilisi Pride have decided to go ahead with the first Pride parade in Georgia, according to  a statement released on Facebook Tuesday.

“Despite existing risks, the first march of dignity in the history of Georgia is in force and we are not going to cancel it. Our supporting groups, family members, friends, international organizations and diplomatic corps, citizens of the EU and our neighboring states will participate with us in the public march,” the statement says (translated from Georgian by DFWatch).

The statement criticizes the authorities’ stance on the issue, saying that “the actions of the government are inadequate and ineffective against hate groups. Georgian statehood and institutions are in danger.”

The move was preceded by failed negotiations between organizers and the Ministry of Internal Affairs on Monday, where the two sides didn’t reach agreement over how to ensure security around the planned event.

Earlier, on Sunday, radical conservatives gathered in Tbilisi’s central Vere Garden and announced that they will establish vigilante groups to patrol the streets and prevent the parade from proceeding. Businessman Levan Vasadze was the key figure in these developments.

The police launched a formal investigation into the case and Monday called several radicals in for questioning, including Vasadze.

Vasadze and his supporters backed down with their idea about vigilante patrols after learning about the failed negotiations between Tbilisi Pride and police. However, he said patrols would assemble at any time if needed. “Don’t relax this week,” he told supporters in an address on Monday.