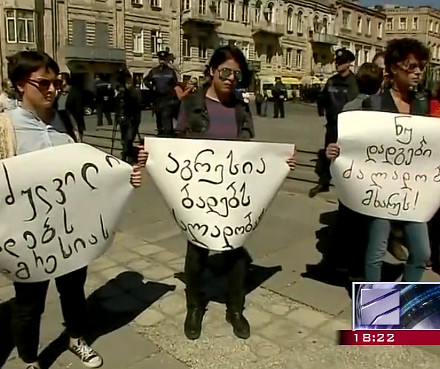 TBILISI, DFWatch–Gay rights activists in Georgia are defying threats from conservative groups and lack of police protection as organizers opt for a street rally during Tbilisi Pride.

The rally is scheduled for the concluding day of Tbilisi Pride, despite continuous threats by radical groups and a decision by the police to absolve themselves of responsibility for protecting the activists.

Organizers earlier rejected an offer by the Ministry of Internal Affairs to hold the event indoors. The MIA has told LGBTQI activists the ministry is unable to to provide security for the event if it is held outside in a public place.

Tbilisi Pride starts June 18 and concludes with a demonstration June 23, organizers say. Although the venue of the event is being kept secret for safety reasons, one of activists, Nino Boklvadze, told Imedi TV that they don’t plan to hold the event on Rustaveli Avenue and “adjacent places”.

Apart from the demonstration, organizers also plan an international conference, social theater and other events.

A small LGBT rights demonstration in 2017 was surrounded and violently attacked by conservative activists.