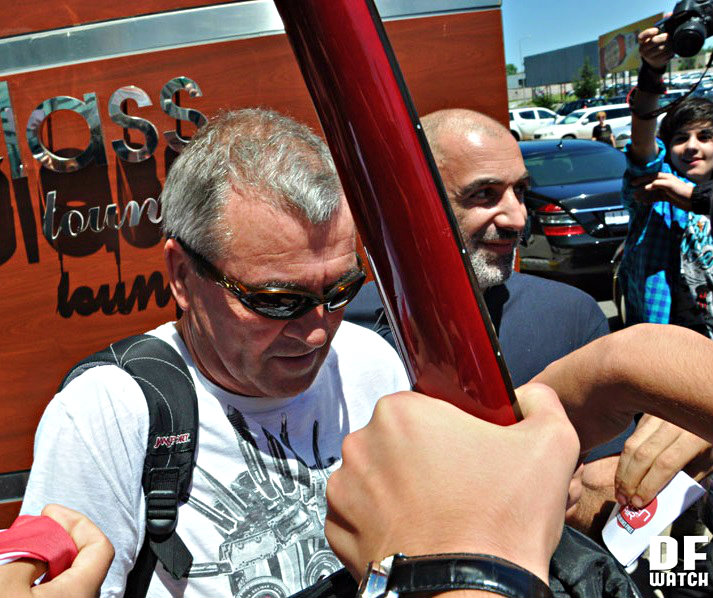 TBILISI, DFWatch–Tbilisi Open Air Festival is getting closer as most of the bands have arrived in Tbilisi.

This year’s big surprise, Deep Purple, arrived in Tbilisi on Tuesday. Right before their departure, Altervision Group, which organizes the festival, made arrangements for Deep Purple fans to meet the band members at the airport as they arrived.

From Tuesday morning, four large buses with Open Air commercial on them and large loudspeakers were awaiting fans at Dinamo Arena, where the gig will take place. Youth lined up to go to the airport together in a column of buses, carrying the flags of Tbilisi Open Air and some of them wearing Deep Purple t-shirts.

Against the background of the band’s familiar tunes, a loudspeaker on buses let people in the street know that Deep Purple has arrived in Tbilisi.

The buses were escorted by cars with Open Air festival flags and many bikers leading the buses to the airport and then all around the city performing acrobatic maneuvers on the road to attract people’s attention.

The musicians stopped for only a few minutes at the airport, but some of the fans managed to take pictures and get autographs on their CDs and guitars. Fans ran after their cars for a few meters, but they didn’t stop.

Ian Gillan, who celebrated his wedding with Bron in Tbilisi in the 1990s, said he is pleased to be back here. He said their performance will consist of several parts, where they will perform old and well-known singles, but also songs from the new album. The other part of the performance will be fully based on improvisation according to listeners’ choices and reactions.

Later in the evening, President Mikheil Saakashvili hosted guests at his palace in Tbilisi http://www.youtube.com/watch?v=_ydNc_-2YOg&feature=share. He introduced the guests to the sights of the capital.

Today’s event starts at 16:00 and will last until early morning of Thursday. Kid Jesus from Georgia will open the festival, followed by Black Strobe, The Subways, Infected Mushroom, Deep Purple, Tricky and Modeselektor.

Tickets are still on sale and cost from USD 24 to USD 150 for VIP tickets.