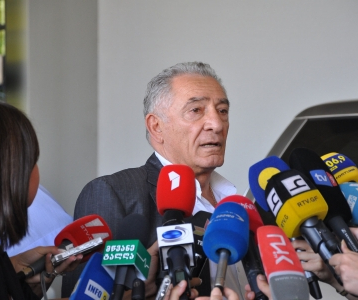 TBILISI, DFWatch–Some of the most influential non-governmental organizations (NGOs) in Georgia on Friday launched a petition against anti-western statements recently made by members of the ruling coalition.

A few days ago, a businessman who is leader of one of the parties in the coalition, said in several comments to the media that joining the Russia-led Eurasian Union might be beneficial for Georgia while joining NATO won’t bring anything good.

“NATO is an aggressive military bloc. I don’t want my country to be part of any military bloc, because we can already see the contours of a nuclear World War Three,” Topadze told Interpressnews.

“We know that Russia is the aggressor and that Russia has deprived us of territories. Russia is ill, but what will Russophobia bring us?”

Zurab Tkemaladze, also from the Georgian Dream coalition, supported the statements made by Topadze and said that Georgia has to consider ‘every option’ including having relations with the Eurasian Union.

A petition launched on Friday expresses concern about the statements, as it can be perceived as an attempt to establish a ‘nihilistic’ attitude toward Georgia’s Euro-integration course, and fuel anti-western attitudes.

The statement goes on to underline that the Mrestvelebi (Industrialists Party), the party both Topadze and Tkemaladze represent, has a declared goal of supporting a western foreign policy course, and that what they said goes against this goal.

Signatories call on political parties and blocs, including Georgian Dream, to clarify their position when it comes to the anti-western attitudes of their colleagues and for the coalition to ‘react adequately’ to those statements.

A spokesman for Erekle II Society this week demanded holding a referendum about whether to join or have a free trade agreement with the Eurasian Union, which created further controversy. Friday’s petition points out that a referendum has already been held.

“European and Euro-Atlantic course is a choice supported through referendum by the population,” the statement reads; a reference to a referendum held in 2008, in which 77% of voters supported seeking membership in NATO.