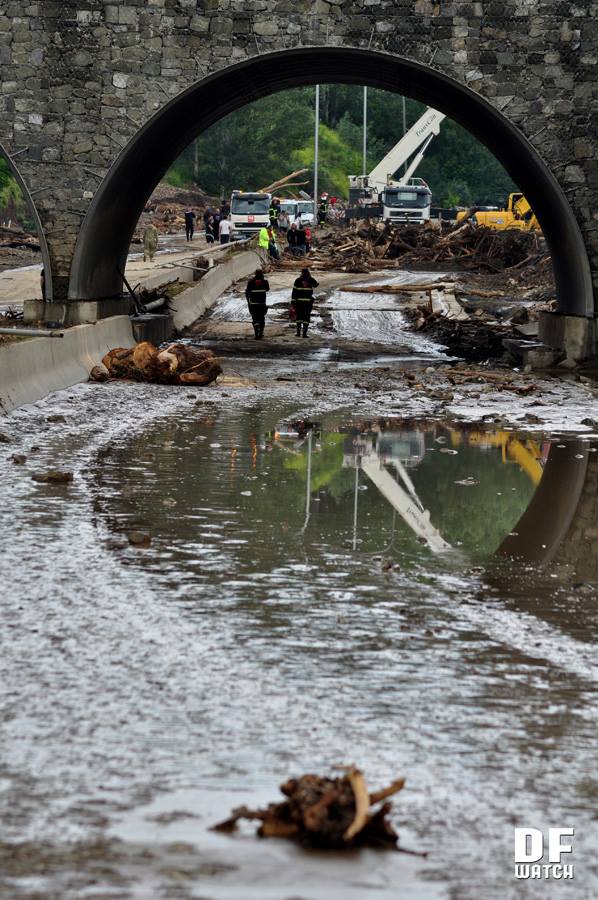 TBILISI, DFWatch–While walking along the path through River Vere valley after the flood, a man approaches and asks to look in a certain direction, where there is just a rock and a river and nothing else. The empty space over the river was once his house. He says he borrowed some boots from his neighbor and is wearing the same T-shirt he wore yesterday, before the disaster started.

He and his family managed to escape their home just as it collapsed and watched it dissolve in the water. Now they don’t own a single thing, apart from a T-shirt and the pants he is wearing.

Later, on the same street, Gulnara calls us over to show us what happened at her place. Her house consisted of two buildings. In one of them there was a kitchen and a bathroom, which entirely disappeared. Another one with bedroom and living room was flooded and almost destroyed.

“I have health problems, had double surgery on my leg, barely walking. I hardly managed to save anything in my house,” she tells us. It is 9:00 in the morning, and she is still waiting for anyone from the government to come and help her.

There is no water on the narrow village-like street, where people are buzzing, collecting clothes and other things and preparing to leave.

At least two bridges, sewage pipes, at least six houses, and a number of garages were completely destroyed in this area, where most of the neighbors remember a drowning man shouting ‘help’, but nobody dared go down to help him. Finally he died, as at least 11 other people during the night.

Inhabitants in this area were later on Sunday evacuated to a temporary shelter.

165 people were placed in hotels, more than 260 had flats rented by the city’s district administrators, gamgeobas. According to the most recent information, at least 40 families are now without a home. 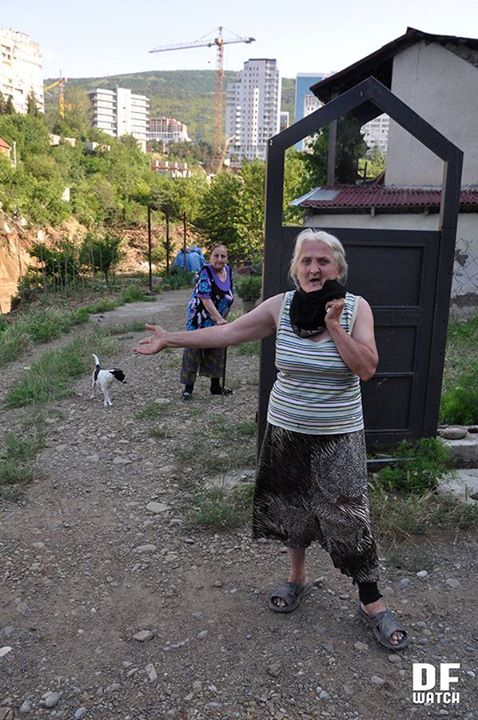 Tbilisians, environmental groups, and opponents of the former government have been discussing the causes of the catastrophe. Most blame the construction of a new motorway through the Vere Valley, which provided a shortcut from Heroes’ Square to Saburtalo. The claim that it was constructed without taking into account the possible risks, most importantly, the redirecting of the river Vere into a pipe.

The beginning of the highway from the side of Heroes Square is currently blocked by pieces of wood and mud. The road is collapsed at least at five places, filled with light poles, enormous trees and rocks. Here and there are crushed cars, most of which were carried away from parking places by the massive flood water.

Groups of fire fighters, rescue workers, soldiers and volunteers have been trying to clean the road since early morning. On the way to the valley where houses are collapsed, there are multi-storey buildings. First floors have been washed out by the water. Inhabitants have been trying to take out muddy furniture, clothes and other things from their apartments.

Some people are just walking around to witness on their own what happened to the place, some taking pictures with their mobile phones.

The situation is even worse on Svanadze Street, where there were a number of casualties. The street is filled with people, most of whom are crying and looking for comfort from friends. Machinery is working to try to get rid of the mud which has filled the entire street. Some people are bringing bread and water, while other volunteers help collecting dry clothes and shoes for affected people.

At the end of Svanadze Street there used to be a dog shelter holding at least 400 dogs and about ten bears.

We walked towards the shelter together with one of the employees. The man burst into tears when seeing the area entirely washed away by the flood water. Nothing is left of the dog shelter. Some of the dogs managed to escape and are now hiding among the graves in the cemetery above.

When the rain started around ten pm Saturday, employees of the shelter came there, weary because of previous flooding incidents, to help the animals leave their cages, but they soon had to get away from the area to save themselves.

“Do you see those ruins of the red bricks over there,” the crying man says, pointing toward some remains of brick walls. “An elderly man, Tamaz, was living there. Beautiful man who had a beautiful garden, tomatoes and fruits nearby. My God, if he was sleeping at night, I hardly think he survived.”

All the bears died and a great part of the dogs from the shelter. The man couldn’t stop crying, listing the names of the puppies and bears he used to take care of. 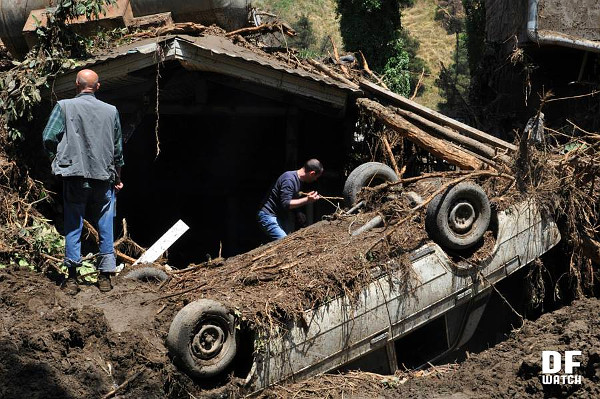 Tbilisi Zoo and the animals

The news reports during the day mostly focused on the animals that escaped from the zoo. Social networks, online media is still filled with different angle pictures of a hippo wandering around Tbilisi that was caught and returned to the Zoo. But he is only among the few of the animals which survived being killed by the bullets.

But what was tragic in the zoo tragedy is that a woman who recently had her arm amputated after being attacked by tigers she took care of, died at night in the zoo with her husband and another zoo employee.

Horrified pictures of murdered animals are everywhere with terrible stories, how some of them were killed in vain.

Many can’t understand the vague reasons for killing animals instead of tranquilizing them. They An online petition was launched to demand the creation of a commission to investigate this and hold people responsible.

Representatives of the zoo were pleading the whole day for people not to kill zoo animals if they discovered them in the street.

Among the stories that were shared was a man with his dog who were approached by wolves expecting something horrifying, but instead the wolves started playing with the dog. Later the same day, the man found out that the wolves had been put down. Among the killed animals are lions and tigers and bears.

All Sunday, the zoo asked people to look for the white lion Shumba, which was not considered dangerous to anyone, asking not to kill it. The cub was found dead in the evening. It had been shot inside the zoo.

One half of the zoo has been destroyed, the part with cages for bears, tigers and lions and other animals. The entrance and the part on the side facing Heroes Square is filled with water and mud. The adventure park looks like images from Chernobyl.

In the evening, the zoo posted pictures of animals that were saved.

The prime minister and the head of the Orthodox Church have been strongly criticized for their statements about the animals and the zoo.
Patriarch Ilia II said the zoo was constructed during Soviet times by the money of melted church bells and ‘nothing can rejoice there.’

Prime Minister Irakli Garibashvili said if an animal is aggressive and is a threat to citizens, government is obliged to ‘act.’ 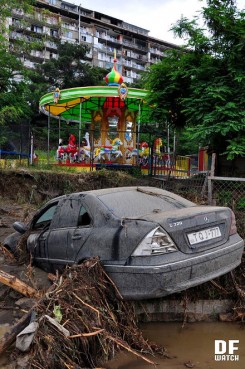 The government has declared June 15 day of mourning, and a public holiday in Tbilisi. The decision doesn’t concern government bodies involved in clean-up work. The goal is to reduce the amount of traffic through the city. Tens of streets are closed to traffic because of the damage.

Volunteers from all over the city, and even from other parts of Georgia, are lining up to help victims of the flood and help tidying up the streets in the capital.

Different states from around the world are planning different events to assist Georgia, for example there will be an auction in Poland and a charity concert in Lithuania. The EU has promised to assist Georgia. Among the words of support, also Russia offered to send about 100 rescue workers to help.