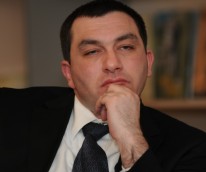 Akmamed Imamkuliev was launched as the UNM’s candidate for gamgebeli in Marneuli, a town in southern Georgia.

But June 5, the district election commission barred him from registering, after a small local non-governmental organization complained, claiming that he was in violation of election legislation because he hasn’t lived in Georgia for the last two years.

The Central Election Commission approved the district commission’s decision and canceled his registration as a candidate.

But the National Movement pursued the case further and took it to court, as is possible under Georgian legislation, and on Tuesday, Tbilisi City Court decided to restore Imamkuliev’s candidacy.

UNM activists claim that the CEC made a political decision when it canceled his candidacy, because although he was in violation of legislation, other candidates have also been in violation, without the CEC intervening.

They claimed that Imamkuliev was targeted because the Georgian Dream coalition wanted to remove its competition. As an ethnic Azeri, he stands strong in the predominantly Azeri town, running against the governing coalition’s candidate who is ethnic Georgian. Locals DF Watch spoke to said Imamkuliev is perceived as a strong candidate in Marneuli.

Minister of Justice Thea Tsulukiani, who is also head of the interagency commission, in a statement on Tuesday welcomed the court’s decision.

“Interagency commission once again reminds every political party that every type of aggression, including by the election administration, is unacceptable and harmful to the country and every candidate must be given equal opportunity to prove their own privileges during the election campaign,” the statement reads.

National Movement activists Giga Bokeria said after the court hearing that this was the only correct decision for court to make. He said the CEC’s decision was harmful to its own reputation.

After leaving the court, Imamkuliev said he will resume his election campaign and continue his fight against forces who don’t want democracy to develop in the country.