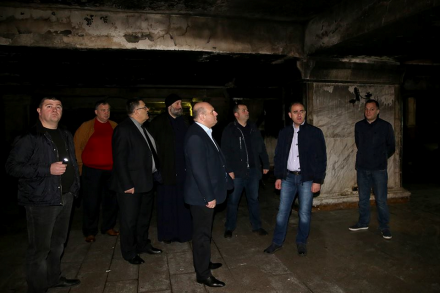 TBILISI, DFWatch–Tbilisi City Hall announced its plans to sponsor restoration works at the Holy Trinity Cathedral, known colloquially as Sameba (‘Trinity’), which was damaged by fire earlier this month.

Prime Minister Giorgi Kvirikashvili asked the Minister of Finance Nodar Khaduri and Tbilisi Mayor Davit Narmania to visit the site of the fire. Subsequently, the decision was made to create a rehabilitation working group financed from the city’s budget.

‘After the damage assessment, the rehabilitation works will be financed from the city budget, but the Ministry of Finance is ready, if necessary, to contribute with funds allocated from the state budget’, the statement on the ministry’s website reads.

No-one was injured in the fire that burnt an area of more than 1,200 square metres inside the cathedral. Prayer service has been temporarily halted and moved to four small chapels surrounding the cathedral. Catholicos-Patriarch Ilia II hold several liturgies in the Sioni Cathedral, which used to be Tbilisi cathedral and the seat of the Patriarch until 2004, when the Holy Trinity Cathedral was consecrated.