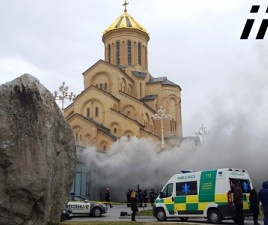 TBILISI, DFWatch–An area of more than 1,200 square meters was burnt at Sameba Cathedral in Tbilisi on Sunday after a fire started on the ground floor of the cathedral.

More than a hundred firefighters worked to extinguish the fire, which started at about 14:00 and lasted for several hours. The reason for the fire is still unknown, but it is suspected that it was caused by an electric malfunction.

No-one was injured. People were evacuated from Sameba, which is the third-tallest Eastern Orthodox cathedral in the world.

Both the head of the emergency service and the Tbilisi mayor were present at the scene.