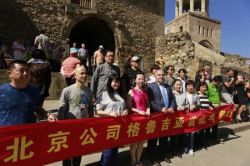 TBILISI, DFWatch–Beijing-Urumqi-Tbilisi flights have been scheduled from Friday, according to Georgia’s National Tourism Administration.

Urumqi is the capital of Xinjiang Uyghur Autonomous Region in North West of China.

So far no further details are known about the flights. The Ministry of Economy of Georgia recently hosted journalists and tour operators from China in Tbilisi  and tourist destinations such as Batumi, Mestia, Kutaisi, and Kvareli.

Urumqi-Tbilisi flights were launched back in 2011. Flights have been carried out every Tuesday, Thursday and Saturday since then via Boing 737 and Boing 757.