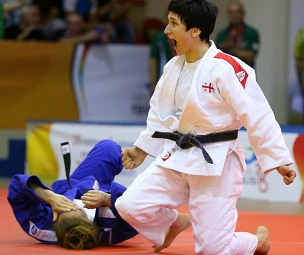 TBILISI, DFWatch-Georgia took two more gold on Thursday in the European junior Olympics which are currently being held in Tbilisi.

“Everyone expected I would win gold and I had no other choice but to win and not let the other one take the prize away,” Beboshvili explained after the match.

Another gold was also in judo and went to Eter Liparteliani in women’s 57kg category, who won over her Polish opponent Anna Dabrowska in the final match.

“I am delighted that I won medal in Tbilisi. Thanks to the audience, as without them I wouldn’t have achieved this,” Liparteliani said.

Georgia now has seven medals, three gold and four bronze – all in judo. Russia is at the top of the table with 19 medals; 7 gold, 5 silver and 7 bronze. Hungary is second with 6 gold, 2 silver and 6 bronze. Italy, France and Germany have 12 medals.