TBILISI, DFWatch – A leading opposition member of parliament says the government’s new tax break for seniors is a form of age discrimination.

Free Democrat leader Giorgi Tsagareishvili, who is chair of the parliamentary faction Unity for Justice, says the initiative is a politically motivated decision and part of the election campaign and that it is ‘unacceptable to make such a discriminatory decision.’

The tax break is an initiative coming from the president which will abolish income tax for those from 45 to 60 years old.

The president made his promise a few weeks ago, and parliament has just started discussing how to work out the appropriate legislative changes to accommodate the president’s promise.

The initiative will exempt people from 45 to 60 from paying income tax for a year, if they are able to find employment starting in the period between January 1, 2011 and July 1. But only those qualify who were unemployed in the three months prior to finding work. 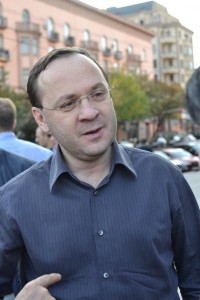 "Where was the government in 2007-2010? Wasn’t there unemployment then?" asks Gia Tsagareishvili, leader of Free Democrats and chair of parliamentary faction Unity for Justice.

The main argument behind it, according to president Mikheil Saakashvili, is that the tax cut creates more motivation to employers to hire people, which will decrease unemployment.

The bill has been through its first hearing in parliament, when it was criticized by the opposition, but the ruling party, which overwhelmingly controls parliament, has said it will not heed these remarks.

One of the problems with the bill is that it is a discriminatory approach towards citizens, according to the chairman of Unity for Justice.

Tsagareishvili says it is a politically motivated decision, because the government never remembered seniors previously, and Saakashvili even called them ‘washed out’.

“I’m interested, where was the Georgian government in 2007-2010? Wasn’t there unemployment then? This is direct age discrimination, aimed at gaining extra votes for the National Movement, with such unjustified changes,” Tsagareishvili claims.

Deputy Finance Minister Rusudan Kemularia thinks it is an exaggeration to call it discrimination, since it will benefit a group.

Kemularia explains the window of eligibility – January 1 to July 1 – with the fact that the concession cannot last forever; that would cause a serious reduction in tax to the state.

The initiative is also being criticized by a number experts, but the parliamentary majority doesn’t have any remarks to the bill.