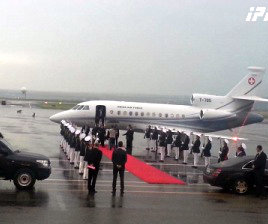 TBILISI, DFWatch–Swiss President Didier Burkhalter arrived in Georgia Monday evening as part of a round trip in the South Caucasus.

According to the Foreign Ministry press office, Burkhalter will Tuesday meet with the president, vice speaker of parliament, foreign minister, prime minister and representatives of civil society.

Burkhalter, who is also head of OSCE, will visit villages bordering with breakaway regions.

Before Georgia, he visited Baku, where he met Azerbaijan’s President Ilham Aliyev. He proposed to hold a meeting between the presidents of Armenia and Azerbaijan in order to start negotiations for a peace agreement.

“We must progress step by step toward peace,” Burkhalter said.

He will stay in Georgia on June 3 and will discuss conflicts of Abkhazia and so-called South Ossetia during meetings. June 4 he will arrive to Yerevan, Armenia.