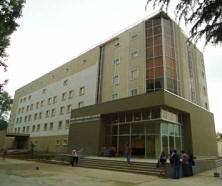 The middle aged man spent one day at Kutaisi hospital before succumbing to the H1N1 virus. (Interpressnews.)

The middle aged man spent one day at the hospital before passing away. He was suffering from a separate illness which exacerbated his condition.

There are nearly 3,000 people infected with the virus in Georgia, but the spread of the H1N1 virus has not yet reached epidemic levels. According to the National Center for Disease Control, the infection rate is currently 250 per 100,000 persons.

“The spread of the virus is medium, while [the number of] deaths is fortunately very low,” Interpressnews quoted NCDC spokesman Paata Imnadze saying.

“All the cases are H1N1 virus and very rarely H3,” he added.

The first death due to swine flu was reported a few days ago in Tbilisi.