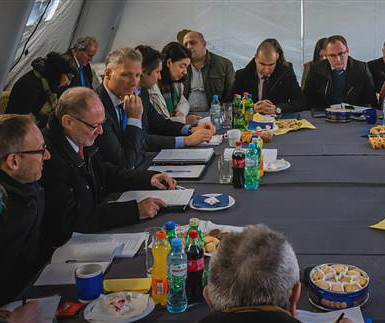 TBILISI, DFWatch–Representatives of Georgia and the breakaway republic South Ossetia will hold talks about missing persons under the auspices of the International Red Cross.

David Sanakoyev, who represents the de facto republic, announced this at a session Wednesday of the Incident Prevention and Response Mechanism (IPRM), regular field meetings held after the 2008 war.

The first missing persons talks will be held on February 5, the South Ossetian news agency RES quoted Sanakoyev saying. It will be done by way of a three-party coordination mechanism overseen by the International Red Cross, he said.

At the IPRM session in Ergneti on Wednesday, the Georgian side raised the issue of two Georgian citizens who were detained for violating the border last year.

Before the meeting, 23 year old Levan Lapachi, who was detained for the same a few days prior, was released.

Eleven people have been detained for border crossing during the last month, according to Irakli Beraia, head of the department for analysis at the State Security Service. All of those who were detained in January are have been released. Only two remain in detention in Tskhinvali.

The EU’s observers assess the security situation on the demarcation line as calm, according to the EU Monitoring Mission (EUMM), which facilitates the IPRM meetings.

“The participants discussed ways to solve irrigation water problems and decided to exchange technical information in order to make the Tiriponi canal system fully functional, to the benefit of the local population,” EUMM wrote.

The next IPRM meeting is planned for February 24.

The Red Cross also facilitates meetings dedicated to missing people from the war in Abkhazia in 1992-1993. The talks are held in Gali and involve the Refugee Ministry of Georgia and representatives of the breakaway republic Abkhazia. One of the issues that have been discussed is excavating 30 bodies from the Babushera airplane disaster and transfer them to Georgia.