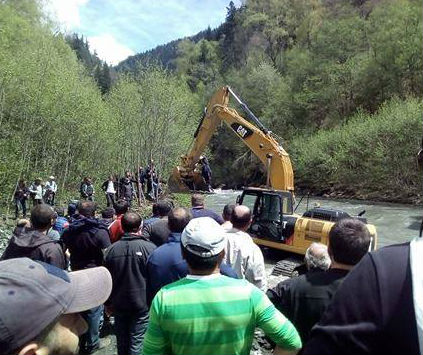 On 10 May, inhabitants of Ieli and adjacent Svan villages organised a protest demanding an immediate stop to excavation works and asking the company’s employees to leave the village’s territory. (Photo from student environmental movement Green Fist [„მწვანე მუშტი“] Facebook)

Tbilisi, DFWatch – A wave of protests and civil activism erupted in Svaneti against a planned gold mining project, while the people behind it remain hidden in offshore shadows.

The tiny village of Eli, more commonly known by its Svan name Ieli, found itself at the epicentre of protests against a gold mining project managed by the company Optical Systems, Inc.

On 10 May, inhabitants of Ieli and adjacent Svan villages organised a protest demanding an immediate stop to excavation works and asking the company’s employees to leave the village’s territory.

InterPressNews quotes a participant of the protest named Khvicha Chartolani who claimed that the company received a licence for conducting tests in 2005, but was never allowed to go through with full-fledged excavations.

Although some local activists have likewise been claiming that the current large-scale works are illegal, an investigation conducted by NGO Green Alternative showed that in 2005, Optical Systems, Inc. was indeed granted a 15-year licence for both exploration and extraction of noble metals in Mestia municipality (Upper Svaneti).

Svan activists have also been disseminating copies of the licence on social networks together with the documentation showing a map of Svaneti with gold deposits marked in multiple locations, including areas close to the settlements of Khaishi, Mestia, and Mulakhi.

Members of the protest have also complained about the deterioration of the local environment after only two weeks of the company’s activities, including deforestation, drilling, and toxic fumes.

The lack of global fiscal transparency makes it very difficult to track the beneficial owners of Optical Systems, Inc. which could shed some light on the nature of the corporate or foreign political interest in Georgia’s mining industry notorious for causing grave environmental degradation and abusing labour rights.

In spite of what environmental activists and some Georgian media reports say, there is no hard proof that the company is owned by Chinese investors. The legal entity registered in Georgia is only a representation of international corporation Optical Systems, Inc. and it is indeed nominally managed by Lina Ma, a citizen of China and permanent resident of Tbilisi, who is currently also the entity’s sole shareholder of 1,000 dollars in shares. The entity’s former director was Nickolai Tickaradze, a U.S. citizen, and before him — Onise Ugrekhelidze, a citizen of Georgia.

It is unclear whether these people are actual representatives of the company or whether they’re acting as proxies for someone else. Ms Ma didn’t answer when DF Watch asked her via email for a comment. 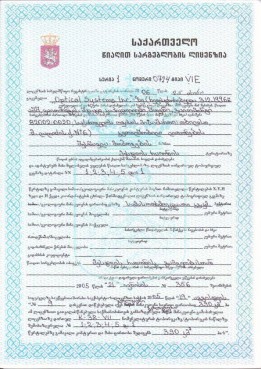 Svan activists have also been disseminating copies of the licence on social networks together with the documentation showing a map of Svaneti with gold deposits marked in multiple locations, including areas close to the settlements of Khaishi, Mestia, and Mulakhi.

The representation in Georgia was registered in 2004 by the American corporation, Optical Systems, Inc. (formerly Focus Pocus, Ltd.).The company was incorporated in Wyoming, USA in 1994, although it mostly operates through the Caribbean state of Saint Kitts and Nevis, for which offshore banking is one of the pillars of economy.

Vladimer Pangani, a Georgian citizen acts as the corporation’s attorney. Mr Pangani is also formally a director of several Georgian companies whose shares are controlled by international firms.

Since 2013, Jillian James, a citizen of Saint Kitts and Nevis has acted as the director and sole shareholder of Optical Systems, Inc., although the company’s founders and former directors, presidents, and shareholders are Sarah and Edward Petre-Mears.

Ms James acts as the director of multiple companies from the ‘business empire’ of Mr and Ms Petre-Mears.

Sarah and Edward Petre-Mears are British citizens residing on the island of Nevis. As of 2012, they acted as proxies to at least 2,200 international firms across the world. If they indeed controlled these firms, like the legal documentation suggests, it would make it one of the biggest business empires on earth.

An investigation conducted in 2012 by The Guardian revealed that the majority of the couple’s companies are registered at PO boxes or generic addresses of incorporation agencies. After the journalists found Sarah Petre-Mears’s residence and managed to talk to her, it turned out that she was merely a proxy allowing her name to be used for managing offshores for people she didn’t seem to know much about.

The newspaper described the couple as ‘sham directors’.

The names of Mr and Ms Petre-Meals feature very prominently in the recently released Offshore Leaks Database connected to Panama Papers. Neither Optical Systems, Inc. nor Focus Pocus, Ltd. are to be found in the database, though.

If both Sarah and Edward Petre-Mears together with the recently appointed director, Jillian James are only acting as a cover-up, while the actual people controlling the Optical Systems, Inc. and the gold mining project in Ieli stay in the shadows, the local activists are only able to raise their grievance with the intermediaries instead of the actual decision-makers and stakeholders.

Except issues related to accountability, the impossibility of knowing whose money is behind the project raises question about potential conflicts of interest, especially in the context of deep penetration of Georgian business by people related to politics, from oligarchs connected to the United National Movement to former prime minister Bidzina Ivanishvili.

Finally, the gold mining project goes against the public interest by disrupting the unique natural and cultural environment of Svaneti.

A great deal of civil activism in Svaneti revolves around environmental issues. Local inhabitants had organised fierce protests against the planned Khudoni Hydropower Plant, which would result in flooding of the village of Khaishi and forced resettlement of its population.

Last month, inhabitants of another Svan village Chuberi initiated protests against construction of the Nenskra Hydropower Plant, which will result in flooding the river’s gorge.

Gia Ansiani, one of the leaders of the protests told DF Watch that the activists had established a 24 hours watch and had been blocking the Chuberi road since 26 April, managing to fully halt the construction works. They gave the construction company time until Monday to meet their demands, which include conducting assessments of project alternatives that not assume flooding of Nenskra gorge.

Reportedly, the excavation works in Ieli were put on halt, although the activists are planning to carry on with their protests until the company leaves Svaneti with all its equipment. Protests were also being planned in the region’s capital of Mestia.