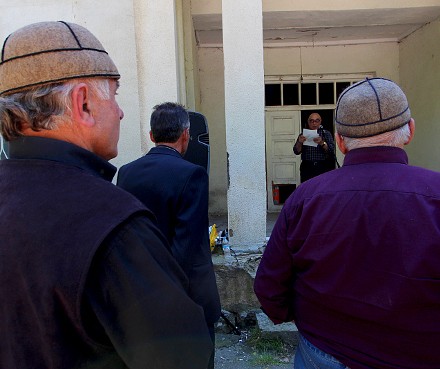 TBILISI, DFWatch–Resistance against the Nenskra hydro power project in Georgia’s northern Svaneti region has caused locals to restore the traditional ruling body lalkhor in order to increase the community’s impact on the national decision-making process.

A congress of community leaders was held in the village Khaishi on June 12, resurrecting an age old Svan tradition.

The council took place in the wake of recent tensions caused by the planned construction of Nenskra hydro power plant near the village Chuberi. If the dam is built, it will result in partial flooding of Nenskra river gorge in which the village is located.

The closed congress ruled that Svans are an indigenous people with its own language, traditions and culture and that it is necessary to restore the ancient tradition of holding a pan-Svan congress called lalkhor in order to have more of a say in large-scale infrastructure projects which are planned in the region.

Other issues discussed during the congress included the need to agree on the strategy for preventing the planned construction of the Khudoni hydro power plant (Khudonhesi in Georgian), including all seventeen communities in the decision-making process regarding planned hydroelectric and mining projects, and develope a legal framework for protecting lands under traditional ownership, which are vulnerable to takeovers by the government and companies.

The congress also concluded that Svaneti’s model of development should move away from hydroelectric infrastructure projects and focus instead on development of ecotourism and agriculture.

Davit Chipashvili from the non-governmental organization Green Alternative is one of just a few outsiders who were allowed to witness the congress. He told DF Watch afterward that the community leaders were planning to reach out to local and international institutions for assistance.

“The participants at the meeting agreed on one position which will be sent to different stakeholders, like the Orthodox Church of Georgia, political parties, international financial institutions such as the European Bank for Reconstruction and Development, the Asian Development Bank, and the European Investment Bank, the prime minister, the president and the parliament. They also demand to agree any infrastructure project beforehand with the lalkhor of Svaneti’s seventeen communities,” Chipashvili told DF Watch.

The congress condemned the fact that a number of pro-dam activists were being paid salaries by Salini Impregilo, the Italian company which is responsible for the project’s implementation, he continued.

“The company started to hire people, whose duties aren’t clear. They hire two or three people from each village and pay them one thousand lari a month — a high salary for local standards. When we asked these people about their positions, they said that they were doing nothing and had no responsibilities except occasional small tasks like changing light bulbs. It was clear, though, that the company was using these people to show the outside world that only a small group of people in Chuberi is against the construction, while the majority is for,” Chipashvili told us.

The lalkhor will convene in Chuberi on 28 June, when the protests against the construction process are expected to resume.