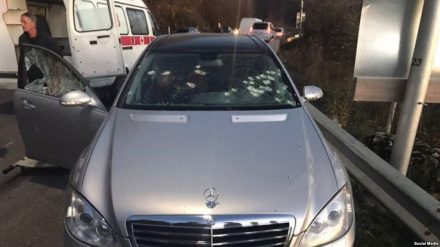 The Mercedez-Benz Ardzinba and Khagba were in was riddled with bullets on the road connecting Sokhumi with Gudauta. (Ekhokavkaza.)

TBILISI, DFWatch–The man accused of attempting to assassinate Abkhazia’s former de facto president in 2012 was shot dead by strangers on Wednesday. Also his driver died in the attack.

Pavel Ardzinba and his chauffeur were driving along the road connecting Sokhumi with Gudauta when their Mercedes-Benz was literally riddled with bullets from another car. Both men died on the spot.

Pavel Ardzinba, 56, was wanted by de facto authorities in connection with the attack on former de facto president Alexander Ankvab, February 22, 2012. He was charged with assassination attempt against Ankvab as well as for murder of two members of breakaway Abkhazia’s state security agency.

After being at large for five years, Ardzinba surrendered on September 26, 2017. However, after the interrogation, the court released him on bail, on condition that  he not leave the territory of Abkhazia.

Pavel Ardzinba was a native of Gudauta and represented the inner circle of the late secessionist leader, Vladislav Ardzinba. He participated in the 1992-1993 Georgian-Abkhaz war. He served for some time as deputy minister of defense, then he worked for the Abkhaz-Turkish firm Abtour.