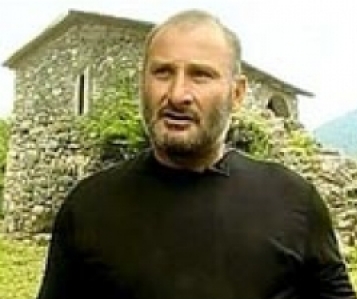 TBILISI, DFWatch–Emzar Kvitsiani, who was accused of organizing a mutiny in Kodori Valley and has been wanted since 2006, has been detained as he arrived at Tbilisi airport.

Since 2006, police have been offering 100 000 lari (USD 60 000) for information about the whereabouts of Kvitsiani. He was accused of a military mutiny and of organizing terrorist attacks.

Kvitsiani was a trustee in Kodori Valley during President Eduard Shevardnadze. That part of the breakaway region Abkhazia was then under Georgian control but is now under Russian control. After the Rose Revolution in 2003, Kvitsiani was on bad terms with Mikheil Saakashvili’s government. In December 2004, the government abolished the position of president’s trustee in Kodori Valley, a decision made by Irakli Alasania, who was then head of government, and today is defense minister.

Kvitsiani announced disobedience to the government and hid in Kodori Valley with 200 like-minded people, forming a paramilitary group called Monadire (Hunter). There were about 200-300 people in Monadire, which was created to protect the local population from Abkhazian forces. This group was subordinate to the Defense Ministry in 2002, but in 2005 Defense Minister Irakli Okruashvili dissolved the group, an unpopular decision among the population in Kodori Valley.

At the end of July 2006 Kvitsiani said he would resist the government’s attempt to disarm his group. He said the reason for his disobedience was a plan to dissolve Monadire, but later he also raised political demands. The government conducted a special operation in July of 2006 and managed to disarm most of his supporters, but Kvitsiani himself managed to run away with several of his closest associates.

His sister Nora Kvitsiani was detained during this operation and served a jail sentence for illegally purchasing and keeping a weapon and participating in setting up an illegal paramilitary group. In December 2012, after the change of government, she was released. Now she wants to be declared a former political prisoner and demands compensation for the years she spent in jail.

Emzar Kvitsiani is charged with organizing a military mutiny and a terrorist attack. He was sentenced to pretrial detention in absentia. Recently he reported that he planned to come to Georgia. The Prosecutor’s Office warned that he would have be detained at the border. He returned on February 28 and was detained at the airport.

His family members said that he took this step on purpose ‘hoping to define the truth’ with the new government.

A hearing was held on Saturday. The Prosecutor’s Office wanted him detained due to a danger that he would go into hiding. Kvitsiani’s defense Lawyer asked to have him released on bail.

“I went through eight years of hell which the previous government organized for me. I found the way to come here in order to find out the truth. This detention means nothing to me. I expected more. I am not planning to run away,” Kvitsiani said.