Students stuck at Enguri bridge on their way to exams, due to row between Tbilisi and Sokhumi

Students stuck at Enguri bridge on their way to exams, due to row between Tbilisi and Sokhumi 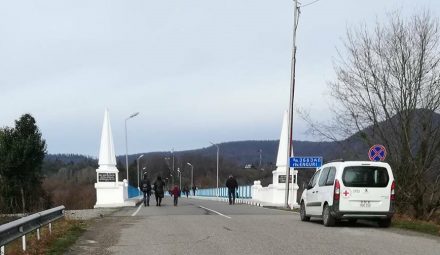 TBILISI, DFWatch–A group of teenagers from Gali district are stuck on the breakaway Abkhazia side of Enguri bridge after Sokhumi closed the sole passage in the wake of anti-Russian, anti-government rallies in Tbilisi.

The students are trying to get to Georgia proper in order to take part in the Unified National Entrance Exams, which are mandatory for those who want to enroll at Georgian higher educational institutions, but became victims of the latest row between Tbilisi and the breakaway capital.

Sokhumi ponders closing the only border crossing between Abkhazia and Georgia proper for  security reasons and as a sign of solidarity with Russia, unless the mass rallies in Tbilisi subside.

We hope the Georgian government takes into account this problem and makes an exception for those teenagers from Gali who might not get to their exams on time, several young boys and girls told DFWatch by phone on Friday. Most of them are headed for Zugdidi for their exams, but some of them are going to Tbilisi and Kutaisi.

“The [checkpoint] closure was absolutely unexpected for us,” one of the Gali school graduates said. “Some managed to cross [Enguri bridge], but since this morning it has been absolutely impossible. We expect some degree of responsiveness from the [Georgian] government.”

We together with the Ministry of Education will do our best to help Gali graduates, the State Ministry of Reconciliation and Civic Equality Ketevan Tsikhelashvili told DFWatch.

“We are working together with the Ministry of Education in order to help Gali graduates get free access to higher education institutions in the Georgian controlled territory. I want to reassure the population that every decision will be made according to their interests and we will do our best to help them,” the minister said.

130 residents of breakaway Abkhazia’s Gali district enrolled at universities in Georgia proper in 2018. Altogether 256 young people from Gali have registered for the Unified National Exams.