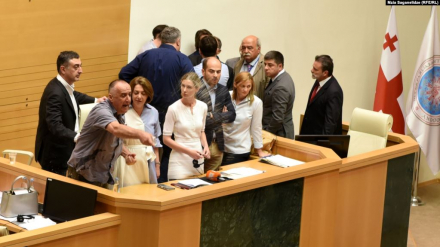 Akaki Bobokhidze pouring water on members of the Russian delegation in the parliament of Georgia on June 20. (RFE/RL)

TBILISI, DFWatch–Members of the separatist parliament in Sokhumi are demanding criminal action against Georgian MP Akaki Bobokhidze for an angry outburst during a brawl last week during an inter-parliamentary assembly.

Bobokhidze, who represents European Georgia, scolded a member of the Russian Duma who was chairing the assembly.

“We were killing you in Abkhazia and will do it again” Bobokhidze told Russian delegation on June 20 at a session of the Inter-Parliamentary Assembly on Orthodox Christianity. The meeting was interrupted by angry opposition MPs, who were infuriated by the fact that a Russian politician was sitting in the chair of the speaker in the parliament.

In addition, he tried to pour water over the head of Russian delegation Sergey Gavrilov, but missed.

“He said this to the whole world. The President of Abkhazia, I will address the Prosecutor General’s Office to open a criminal case on this person. Ask our Russian counterparts to put him in international search,” representative Dmitri Dbar said during a session in the separatist capital Sokhumi on Tuesday.

His address was met with unanimous consent in the Sokhumi parliament.

Meanwhile, Bobokhidze flatly denies his words were directed at Abkhazians, asserting that he meant Russians who fought on the side of Abkhaz separatists during the 1992-1993 war.

“If Russians were killed, they were killed just because they poked their nose in there where they had no business. I do not have any regrets if a Russian [militant] was killed by me. This is what I told Russians,” said Bobokhidze, who claims to have been a member of the Georgian military during the Abkhazian War.

Meanwhile, Sokhumi ponders closing the only checkpoint between Abkhazia and Georgia proper due to security reasons and as a sign of solidarity with Russia, unless the mass rallies in Tbilisi subside.