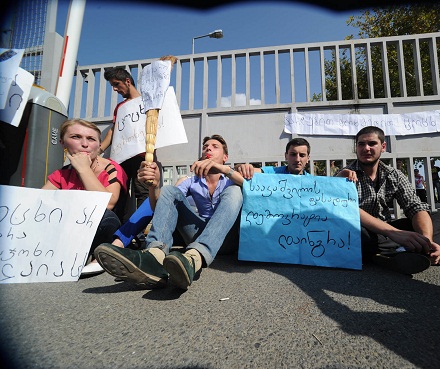 TBILISI, DFWatch – Student groups gathered outside of Gldani prison Friday, in a more scaled down protest against prisoner abuse than earlier in the week.

Organizers decided not to hold a mass rally on Friday to avoid provocation.  They were greeted by prisoners who shouted ‘viva Georgia’, and hung handkerchiefs t-shirts and other garments out of their cell windows.

The youth again demanded that the recently stepped down interior minister Bacho Akhalaia is put on trial for his role in establishing the system of abuse during his time as prison minister.

They plan more rallies and large scale rally at president’s residence. But not until Monday. An initiative group will be set up for youth which will organize the next rallies.