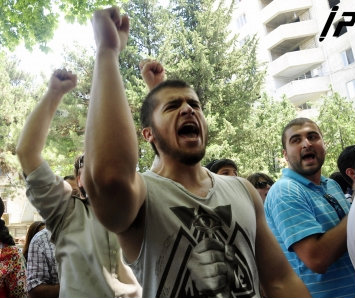 TBILISI, DFWatch–Students at Tbilisi State University on Monday demonstrated against what they say is a clan-run education system which doesn’t encourage scientific activities.

The march started from the central branch of the university and ended outside the Ministry of Education.

Students demand solutions and say there is no encouragement for scientific activities and that the university is not under democratic control, but managed by ‘clans’.

One of their demands is to see documents about the university’s expenditures in order to prove that certain professors are embezzling money.

Participants brought posters with messages like ‘fight for the university’ and ‘we demand changes in the education policy’.

At the end of the demonstration, participants said they were promised that they will get the documentation of expenditures the next day.

“We were standing right on these ladders in 2010 demanding changes in higher education, reforms, and these demands are still unfulfilled today,” Batu Kopaliani, one of the organizers, said Monday in an address to protesters.

“We think the rector of the university and the administration cannot manage effective governance. There is corruption and nepotism,” said another organizer, Alexandre Tsagareli.

In the evening, students said that they have an appointment at the Ministry of Education Tuesday morning to meet with the minister to discuss the problems and future plans.