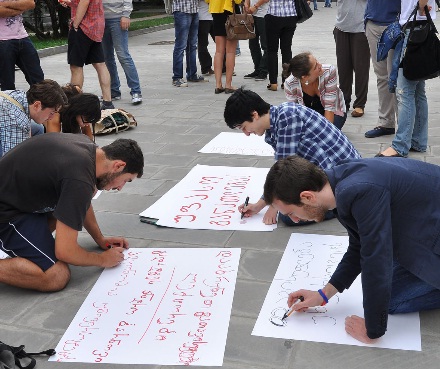 The students say a professor was fired because of her political views, while the university claims she was made to leave after the contract expired. (IPN.)

TBILISI, DFWatch – Students at the state university in Tbilisi have launched a protest to demand that a lecturer who was fired for her political views gets back her position.

The fired lecturer thinks that the reason of her dismissal was her oppositional political views. TSU’s administration denies this, and claims that the university does not have any information about their employees’ political activity. They claim Gafrindashvili was fired after her contract expired.

Lela Gafrindashvili participated in a contest for an administrative position, but she was not called for a second interview. She is taking the case to court and requesting to know by what criteria she was rejected. Her students are protesting the dismissal of other lecturers at the university too.

Students are gathering at the building of university, demanding the resignation of the dean of the Faculty of Social and Political Sciences. Andro Barnovi, the new dean at TSU, was previously deputy defense minister. The student movement Laboratoria 1918 claims that he serves the interests of ruling party. They protest that the board of regents at TSU is full of people who work for state bodies.

Another problem is that students can’t choose the subjects they want due to a non-user friendly database system. Students claim that they never know the exact time when the database is open, and sometimes if they are late, someone else has chosen subject faster, and they stay without credits. Also, if lucky, a student may manage to choose all subjects, but then he can’t be sure that the time of lectures don’t coincide with each other.

To fix the database was Laboratoria 1918’s third demand.

Students demanded to meet with responsible entities on September 14. The guards stopped them, claiming that the students were going to disturb the lectures. But lectures don’t start until September 17, so the guards named a new reason: that they had a megaphone. The students immediately gave them their megaphone and asked to be let in.

Their next protest is planned for September 17 outside the TSU building.