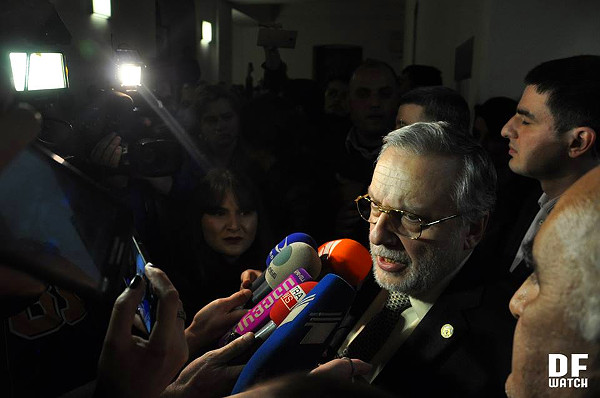 Both groups grew increasingly frustrated with a decision by police not to allow anyone to enter the building except accredited journalists. They both accused the police of letting small groups of students from the opposing group inside the building yesterday evening.

Hundreds of protesters are gathered around the building, and a clash with police developed as those inside tried to help those outside get in.

Members of the group calling itself Auditorium 115 accused supporters of the tvitmmartveloba (‘student government’) of resorting to violence and having neo-fascist sympathies. They also asked Prime Minister Giorgi Kvirikashvili and the Ministry of Internal Affairs to intervene.

During a meeting of university staff, who have taken different positions in the conflict, the rector declared that he will not resign.

“What is happening at our university is affecting the whole country. Different political forces are interested in the processes that are happening now at our university. It is my responsibility as rector to support the unity of the university, and I am not planning to resign,” Vladimer Papava said.

Papava met later with members of Auditorium 115 and thanked them for their support.

Supporters of the tvitmmartveloba broke into the rector’s office and declared that they wouldn’t leave the building until Papava had resigned.

They also tried to intimidate one of DF Watch’s journalists, accusing him of recording ‘provocative videos’.

“Police is limiting our right to freedom of expression by not letting our supporters inside. The rector should be held responsible for this disorder. We plan to continue our protest until he resigns,” Shalva Sabauri, one of the leaders of tvitmmartveloba said.

Papava is currently meeting with members of tvitmmartveloba. Journalists were led out of the room and told that it may last for two hours.

Meanwhile, several professors of the university went on a hunger strike in order to support Papava in his decision to stay on as rector. Among those now on hunger strike are Manana Kharkheli, Izolda Chiladze and Giouli Keshelashvili.