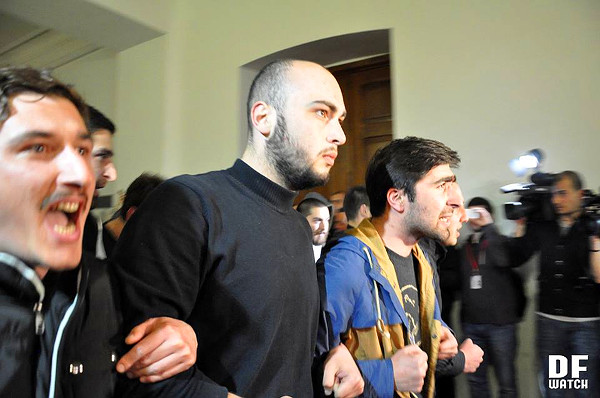 TBILISI, DFWatch–After several clashes during the day, the tension at Tbilisi State University continued on Monday, between the student government, called tvitmmartveloba, and another group of students calling themselves Auditorium 115.

Even though Giorgi Gaprindashvili, the candidate for university chancellor, withdrew his candidacy and this was one of the students’ main demands, they continued rallying for the remaining demands; to reorganize the tvitmmartveloba and investigate the presence of intelligence agents at TSU.

The only demand the other party, tvitmmartveloba, has is that the rector should resign.

In the evening, the two sides waited outside the rector’s office for a decisions regarding their demands. Security guards and police were posted in front of the door. Tvitmmartveloba shouted ‘Resign!’ to the rector, while students from Auditorium 115 shouted ‘Don’t resign!’

In the beginning, I stood in the middle of the two crowds. Police surrounded me and I was trying to take pictures of both sides, when I noticed that the tvitmmartveloba group was gone. I followed them and saw a group of young men forming a cordon at the end of the hall.

When journalists approached them and asked what their plan was, they responded that they were planning to protect their position. How? they were asked. Their only answer was to get the women away from the area.

A minute later, a crowd of enraged men decided to run in the direction of the police, security guards and students from the other side. They clashed. I got in the middle and tried to take both pictures and videos.

At first, there were a lot of journalists, but slowly the police helped to get them away from the center of the melee.

“A woman is here, take her away,” one of them said, with reference to me.

“We have a woman here. Don’t do anything,” the other one said, but the crowd continued behaving violently. 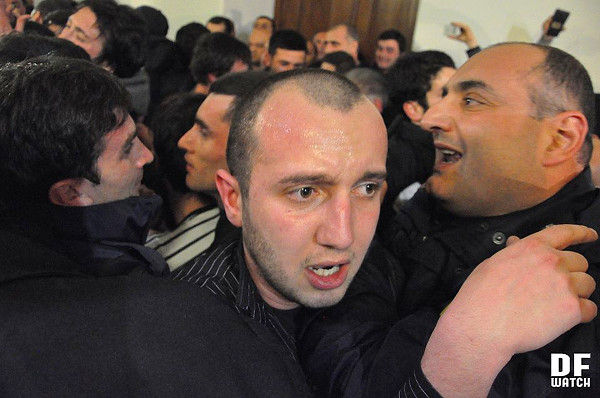 I saw guards about to faint, while police barely managed to force the two sides apart.

“Hey, police, take the woman away. You are a journalist, take care of yourself,” one guy yelled at me. When I said not to worry about me, someone ripped my camera bag away from me and then another man accidently hit me in the chest very hard.

I continued shooting, when a few cameramen got in the middle of the clash. It lasted maybe ten minutes or more.

Police and security guards finally managed to force the tvitmmartveloba group to one side and reinforce the cordon.

With my hands shaking, I found my bag trampled on the floor. My colleagues were discussing how they survived the clash, one out of maybe ten clashes during the day, but probably one of the most violent.

There were reports of some students and guards losing consciousness. 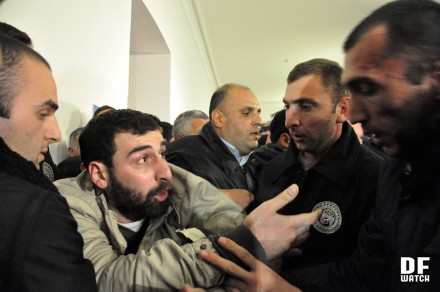 Shortly after the clash, a man from the meeting behind the door came out and said that it is out of the question for the rector to resign. This enraged the tvitmmartveloba, but caused shouts and applause among the protesting students.

Counter-protests continued. The loudest whistles and horns were heard from both sides. Shouting between the two sides continued the entire day.

“No to the tvitmmartveloba,” students yelled, and jumped so hard that the floor started shaking.

Some professors stood with the students, shouting to them and supporting them.

Meanwhile, the police reinforced all the entrances to the building, hardly letting anyone in or out.

Some student protesters who left the building during the day were not let inside, which resulted in another wave of protest. 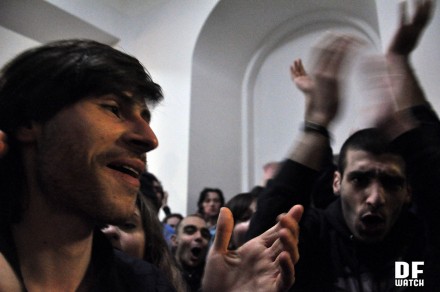 Students were trying to get their friends inside. Some even jumped in through the window. It was raining heavily outside and some of the students had to stay and wait to be let inside. After a few hours of standing in the rain, they decided to leave and come back on Tuesday morning.

Meetings continued at the university. The president’s advisers and as several NGO representatives arrived and met with the students.

Journalists are spending days and nights with the protesters.

The rector, Lado Papava, left the building. He said he does not consider leaving his position. Some of the professors left with him. Students continued to plan their next steps. Most of them are again staying overnight at TSU.

In the evening, journalists working for the online media outlets Liberali and Netgazeti reported that they were pressured at the Tvitmmartveloba protest, as some people took their phones and dropped their cameras, damaging them. http://netgazeti.ge/news/101482/ A reporter for Netgazeti managed to get the phone back, but a camera lens belonging to a photographer for Liberali was broken. Netgazeti writes that the people who took the phone deleted material on it.